We are Celebrating the 20th Anniversary of Bowman Library! 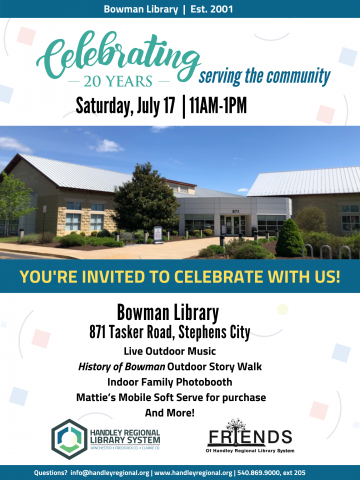 Handley Regional Library System is thrilled to be celebrating the 20th anniversary of the Mary Jane and James L. Bowman Library, which opened to the public on July 16, 2001. An anniversary celebration will be held on Saturday, July 17, at Bowman Library from 11 AM to 1 PM. The festivities will include a live, old-time music jam session, so community members are encouraged to bring an instrument and join the fun, or just come to enjoy the music. There will also be an indoor family photo booth, a “History of Bowman” outdoor story walk, Mattie’s Mobile Soft Serve for purchase, displays of the history of Bowman throughout the library, and much more.

“We are so excited to celebrate Bowman Library’s 20th Anniversary. Each of our three branches is unique, and Bowman Library has been integral to reaching thousands of patrons in our library system. With large windows overlooking a beautiful lake, patrons can enjoy perusing stacks of library materials in a spacious, friendly atmosphere,” stated Library Director John Huddy. “We are proud of Bowman Library and look forward to continue to serve the community with books, WIFI hotspots, videogames, eBooks, DVDs, magazines, and more to borrow, as well as programs for adults, teens, and kids, and the many other resources available to the community.”

In a typical year, Bowman Library has:

“We love Bowman Library and our patrons. Come celebrate with us on July 17th and throughout the month to enjoy all we have to offer,” states Bowman Library Branch Manager Mary Anton.

The addition of a library branch in Frederick County was first put into action in 1996 when the Board of Supervisors hired an architect to design a new facility. The original plan called for a 35,000 sq. ft. footprint, with the future expansion capabilities to 50,000 total sq. ft.

In 1999 with additional demands being placed on the construction budget, it appeared that the plans would be scaled down. The building could only be 31,000 sq. ft., thus reducing seating area and space for books to meet the budget. Instead of the planned standing seam room with a lifespan of 50 years, an asphalt roof with a much shorter lifespan would have to be installed. That is when James L. Bowman came forward with a $500,000 donation to supplement the monies from Frederick County. With the Bowman donation, the planned library could be built to the full size of 35,000 sq. ft. with a standing seam roof. Because of his generous contribution, the new library was named for James L. Bowman and his late wife, Mary Jane Bowman.