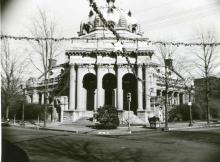 Judge John Handley of Scranton, Pennsylvania left $250,000 in his will to “ . . . open a Public Library for the free use of the people of the city of Winchester forever.” The Handley Trustees hired architects J. Stewart Barney and Henry Otis Chapman of New York who designed the building in Beaux-Arts style. The Handley Library opened in 1913 at a cost of $149,198 for the building and furnishings. An addition was added to the building in 1979 and a complete renovation, designed by Dennis Kowal Architects, was completed in 2001.

In 1979 the library became a regional library when Frederick County and then in 1981 Clarke County joined the system. The first public library in Clarke County, part of the regional system, opened in June 1985 and was operated by volunteers for the first two years. 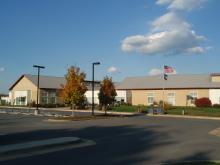 The Mary Jane & James L. Bowman Library opened in July 2001. Designed by the architectural firm of the Lukmire Partnership in Arlington., Virginia, the Library is named in memory of James and Mary Jane Bowman. Mr. Bowman made his donation in 1999 to honor his wife, Mary Jane, a well-known nurse and community supporter, who died in 1991. James L. Bowman died in December 2001.

In April 2009, the Clarke County Library moved into a new space in the Berryville-Clarke County joint office building at 101 Chalmers Court, Berryville, VA. 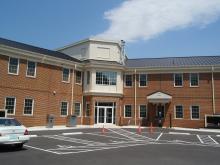 More details and over 375 photographs of library history are in Handley Regional Library The First One Hundred Years, published in 2013 as part of the library's centennial celebrations.  Order online