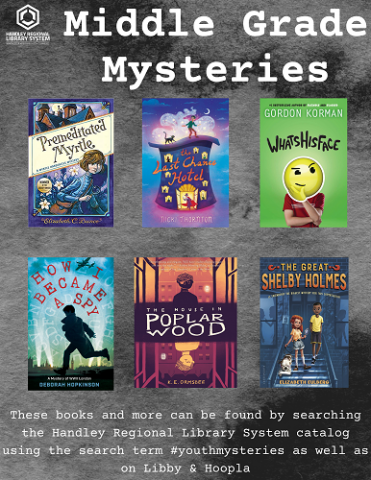 Our middle grade book spotlight this week is taking a look at Mysteries!!!  There are so many different types of mystery books available that there is literally something for everyone’s tastes!  Some are straight mystery/detective stories while others are more suspenseful and thrilling; mysteries are usually cross genre as well meaning that not only is there a mystery element, but there may also be some fantasy, science fiction, or historical elements as well.  We have a great selection this week from realistic to fantasy, murder mysteries and crime solving so you will either find something in your reading comfort zone or maybe you will feel like branching out this week.  These books and more can be found by searching the catalog using the search tag #youthmysteries as well as on Libby and Hoopla.  Check back next week for a new middle grade book spotlight and if you have any book suggestions, please let us know!!

Premeditated Myrtle by Elizabeth C. Bunce--When twelve-year-old aspiring detective Myrtle Hardcastle learns her neighbor in quiet Swinburne, England, a breeder of rare flowers, has died she is certain it was murder and that she must find the killer.

How I Became a Spy by Deborah Hopkinson--When a young woman goes missing, leaving behind only a coded notebook, thirteen-year-old Bertie Bradshaw teams up with Eleanor, an American girl, and David, a Jewish refugee, to try to decipher the notebook and stop a double agent revealing a major military secret to the Nazis.

The Last Chance Hotel by Nicki Thorton--Seth, a kitchen boy at the Last Chance Hotel, is forced to work for the hotel's cruel owners until he's old enough to set off on his own and follow his dream to become a great chef like his father. But when a group of magicians checks into the hotel, special guest Dr. Thallomius is poisoned and Seth's dessert is blamed. It's up to Seth and his cat, Nightshade, to solve the mystery and prove his innocence.

The House In Poplar Wood by K.E. Ormsbee--Twins Lee and Felix live in Poplar Wood with their parents, but because of a mysterious Agreement, Lee and his mother serve Memory, Felix and his father serve Death, and neither of the boys can leave except on Halloween. One Halloween, a local girl is murdered and Gretchen Whipple approaches the twins with a deal: help her solve the murder and Gretchen will help break the Agreement. But as the three investigate, they learn the murdered girl is only the beginning and that death is on the loose.

Whatshisface by Gordon Korman--Twelve-year-old Cooper Vega and his military family have moved so often that he is used to new schoolmates not knowing his name, but at the moment he has a bigger problem--his new phone is haunted by the ghost of Roderick Northrop, a boy from the sixteenth-century, who needs his help to finish a quest, which is somehow tied up in the Stratford Middle School production of Romeo and Juliet.

The Great Shelby Holmes by Elizabeth Eulberg--Nine-year-old Shelby Holmes, the best detective in her Harlem neighborhood, and her new easy-going friend from downstairs, eleven-year-old John Watson, become partners in a dog-napping case.