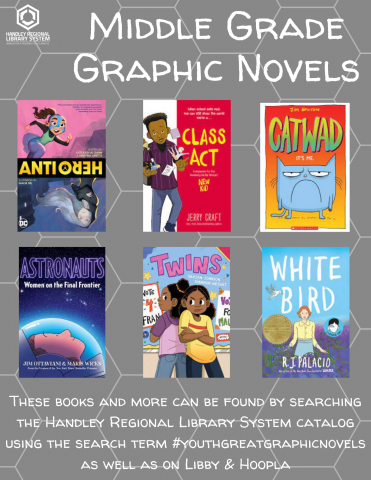 Our Middle Grade book spotlight this week is focused on graphic novels!!!  Graphic novels are incredibly visual stories that can feature pretty much anything fiction and nonfiction.  Done in the style of comic books, there is a huge variety of choices; literally something for everyone so even if you have never read one before, you will definitely be able to find something.  For our talk this week, we have a great selection of nonfiction, fantasy, historical, humor, and realistic to get you started.  These books and more can be found by searching the catalog using the search tag #youthgreatgraphicnovels as well as on Libby and Hoopla.  Check back next week for a new Middle Grade book spotlight and if you have any book suggestions, please let us know!!

Anti/Hero by Kate Karyus Quinn--Piper and Sloane are both teenage girls with a big secret: Piper has super-human strength, and Sloane has super-human intelligence. Their powers have led them down two very different paths. Piper wants to be a superhero and use her powers for good, and Sloane uses her powers for the evil plans of her grandfather. When the sworn enemies find themselves after the same technology on a mission, the device accidentally activates, and the girls end up switching bodies. They must learn how to live in the other's shoes and work together to figure out how to switch back. Along the way, they come to appreciate the other's power and build an unlikely friendship.

Astronauts: Women On the Final Frontier by Jim Ottaviani--Presents a graphic novel history of women in space, exploring the struggles that both American and Russian women, including Mary Cleave, Valentina Tereshkova, and Sally Ride, faced in their quest to become astronauts.

Class Act by Jerry Craft--African American eighth grader Drew Ellis is used to working hard, but he's starting to realize that even if he works ten times as hard as his classmates at the privileged Riverdale Academy Day School, he still won't be given the same opportunities as they are. To make things worse, Drew begins to feel that his good friend Liam is one of those privileged kids, especially after a visit to Liam's giant house. Drew wants to pretend like everything's fine, but it's hard not to treat Liam differently and their mutual friend Jordan doesn't know how to keep their group together.

Twins by Varian Johnson--Maureen and Francine Carter are twins and best friends. They enjoy the same foods, participate in the same clubs, and are partners whenever there's a school project. But on the first day of sixth grade, Francine wants to be called "Fran" and she makes a point of trying to be different from Maureen: joining the chorus, dressing differently, and only having two classes with her sister. But when both girls run for class president, their relationship becomes even more strained and Maureen begins to wonder if sisters really are forever.

Catwad: It’s Me by Jim Benton--A grouchy, blue-colored cat named Catwad hates everything, but his best friend Blurmp is a happy-go-lucky orange-hued cat who seems able to see the bright side of absolutely anything. Together, they make a comic pair in any situation.

White Bird by R.J. Palacio--Tells the story of Julian's Grandmere's childhood, when she was hidden by a family in a Nazi-occupied French village because she was Jewish, and how a boy who she and her classmates once teased and shunned became her best friend and savior.