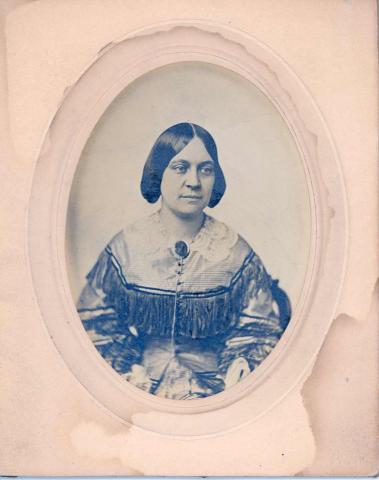 A photographic portrait of Betty Taylor Dandridge, daughter of U. S. President Zachary Taylor, is on its way to the National Portrait Gallery in Washington, D.C. for an exhibit on first ladies. The photograph was taken in 1860. “Miss Betty,” as she was known, served as the White House's official hostess during her father’s presidency and later settled in Winchester, Virginia with her second husband.

Personnel from Crozier Fine Arts arrived the morning of Thursday, 24 September to pack the picture and deliver it to the National Portrait Gallery. Crozier specializes in moving and storing works of art, and its staff took great care to safeguard the picture with protective packaging. You can see selections from the Gallery’s collection of first lady portraits here: https://npg.si.edu/portraits/collection-highlights/first-ladies

Mary Elizabeth Taylor was born in 1824 to Zachary and Margaret Taylor. She grew up in Kentucky and on various Army forts where her father was stationed during his military career. In 1848, she married William Wallace Smith Bliss, one of her father’s aides. That same year, her father became the 12th President of the United States.

Taylor’s wife was reluctant to take on the public role of first lady and so it fell to Betty to fill in as hostess at official functions. At the Inaugural Ball, she appeared in a simple white dress with a white flower in her hair. Her naturalness became a hallmark of her personal style. Later, she would have a popular dance song written in her honor.

As her mother’s health declined, Betty began to take on the full responsibility of managing the domestic side of the White House as well as being official hostess of the Taylor family.

When her father died in 1850, she and her husband moved to Mississippi. He died in 1851 of yellow fever. Betty married for a second time in 1858 to Philip Pendleton Dandridge, a lawyer from Virginia, and moved with him to Winchester. They lived in a house on Braddock Street, although it has since been demolished.

Dandridge died in 1881, and Betty in 1909. She is buried in Mount Hebron Cemetery. One obituary writer remembered her as “one of the loveliest mistresses of the White House.”

Published by Lorna Loring on
September 25, 2020