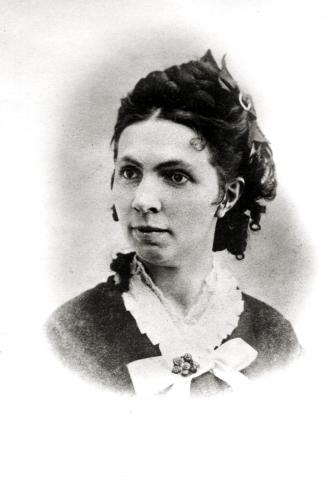 Recently, one of our researchers sent us an old news clipping found in a family scrapbook. The article, entitled “The Handley Library A Priceless Boon: Nemo Thinks All the Winchester People Should Feel Very Grateful For It” was undated but the content suggests it was written shortly after the Handley Library opened to the public in 1913.

It’s hard to miss Nemo’s excitement about what the library meant for the City of Winchester and its residents, both present and future.  ‘”Ma Winchester” can well be proud of the ownership of such a splendid building in which there is stored already so much of the brain work of the past centuries, and the passing years will add to its riches,” she wrote.

Nemo was the alias of Mary Katherine (Kate) McVicar(1843-1920). She was born in Winchester to John and Catherine McVicar and lived with her family at a house on North Loudoun Street across from Fort Loudoun.

McVicar was both a prodigious and popular columnist, with articles appearing in both The Winchester Journal and The Winchester Times. With the establishment of The Winchester Evening Star she began a weekly column that lasted 24 years.

Her topics were wide ranging. She dispensed advice, wrote about local and national news, and introduced readers to history and criticism. In 1901, The Winchester Evening Star published a collection of articles called “Echoes of the War,” based on her experiences of the Civil War in Winchester. McVicar had been a volunteer nurse during the conflict and, it is generally believed, lost her true love in the fighting. She never married.

McVicar always wrote under the penname Nemo, which in Latin means “nobody.”

The Stewart Bell Jr. Archives holds a collection of McVicar’s articles and poetry in several scrapbooks (Kate McVicar Collection, 1018 THL). You can read the article about the opening of the Handley Library here (opens as PDF):  https://www.handleyregional.org/sites/default/files/2020-04/handley-library-a-priceless-boon.pdf