We are the Dinosaurs Storytime 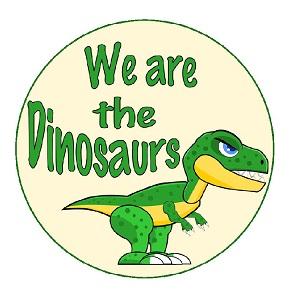 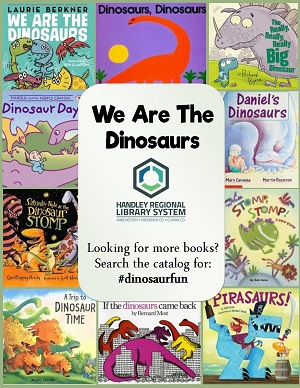 This is our final storytime of the summer season before we take a short break to prepare some great fall themes and we thought we'd end with a bang! Or perhaps a ROOOOAAARRRRR!

If you have a preschooler, you may have heard of the Laurie Berkner band and their famous song, "We Are the Dinosaurs"! Two years ago Laurie Berkner published a book to go with the song, which is the inspiration for this week's storytime theme at the Handley Regional Library System.

We'll end our week of dinomania with the summer reading finale, so if you're been participating on our summer reading program, don't forget to get your final book prizes and raffle tickets redeemed by August 7th before the prize drawings!

Get into the "dino-mood" with a "dino-mite" pile of books, which you can find by searching the library catalog for the tag: #dinosaurfun.

You can make some dinosaur feet and act out the stories with Dinosaur Stomp. It's easy! You need two paper sacks per child; (the bigger the sack, the bigger the dinosaur feet), and masking tape. Have children stand with one foot in each sack. Crinkle the top of the sack around child’s leg and tape tops (not too tight) with masking tape. Then stomp and growl while reading “Saturday Night at the Dinosaur Stomp” or “We Are the Dinosaurs”. You can also stomp to the video of Laurie Berkner's "We Are the Dinosaurs" and while singing some of the dino-music below.

Dinosaur Pretend
Spread your arms, way out wide,
Fly like a Pteranodon, soar and glide.
Bend to the floor, head down low,
Move like Stegosaurus, long ago.
Reach up tall, try to be
As tall as Apatosaurus eating on a tree.
Using your claws, grumble and growl
Just like Tyrannosaurus on the prowl.