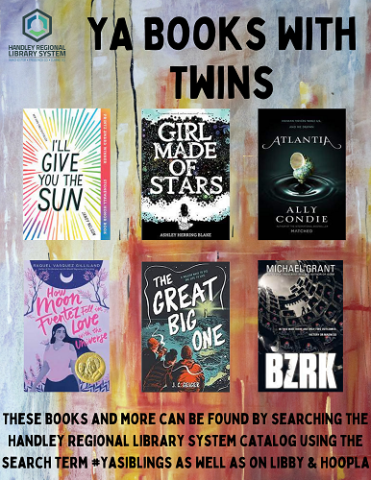 Our teen book spotlight this week is all about books which feature twins as main characters!  These titles are all about twins (brothers and brothers, sisters and sisters, and sisters and brothers) and their relationships which are the main focus of our amazing stories.  Twins have a unique relationship which is different from other siblings and they can be found in not just realistic titles but also in fantasy, science fiction, and dystopian--all of which we feature in our theme for this week. These books and more can be found by searching the catalog using the search tag #yasiblings as well as on Libby and Hoopla.  Check back next week for a new teen book spotlight and if you have any book suggestions, please let us know!!

I’ll Give You the Sun by Jandy Nelson--Growing up, fraternal twins Jude and Noah were inseparable, but in their teen years something happened to tear their family apart, and the siblings each have only half the answer as to what happened. Noah tells the story from when they were 13, when he was figuring out his sexual identity and his sister Jude was playing the part of daredevil; Jude takes over the narrative when they are 16, when a boy comes between her and Noah. As healing begins between the siblings, it is a shared passion for art that pulls them together again.

How Moon Fuentez Fell In Love With the Universe by Raquel Vasque Gilliland--As the younger sister of a social media star, Moon Fuentez has reconciled the fact that she takes a backseat to her sister's fame and is destined to be the woman behind the camera. When she's coerced into running the merchandise table for a cross-country tour of social media stars like her sister, she vows to focus on saving money to go to art school. Her plan backfires when she meets her partner and bunkmate Santiago Phillips, who she initially hates, but grows to more than like. Suddenly, Moon isn't feeling like she's a wallflower any longer and that it may be time to step into the limelight with her own dreams.

Girl Made of Stars by Ashley Herring Blake--Mara's twin brother Owen is accused of rape, and as close as they are as siblings, Mara seriously questions whether he is capable of sexual assault. To complicate matters, the girl accusing Owen is Mara's friend Hannah--and Mara is already dealing with one crumbling relationship in her ex-girlfriend Charlie. As Mara, Hannah, and Charlie face the crime, they are all forced to confront their feelings about family and friends, right and wrong, consent, victim blaming, and past traumas.

The Great Big One by J.C. Geiger--Seventeen-year-old Griff has grown up in the shadow of his twin brother, Leo, and their prepper community of Clade City that prepares for earthquakes, wildfires, pandemics, and nuclear war. But Griff is more concerned about living in the present, and playing in a band with Charity Simms. When Griff, Leo, and Charity hear a late-night radio broadcast of beautiful music that the preppers can't trace, they vow to find its source. However, the teens are unprepared for what they find and for what they must risk in the process.

Atlantia by Ally Condie--Rio has always dreamed of leaving the underwater city of Atlantia for life Above; however, when her twin sister, Bay, goes in her place, Rio is left stranded below. With nothing left to lose, Rio begins asking questions about her mother's death, and what she learns leads her to unleash her long-hidden siren voice in order to save Atlantia from destruction, and fulfill her destiny.

BZRK by Michael Grant--In the near future, nanotechnology has skyrocketed, grown to the size of single atoms, gene spliced to invade human brains and rewrite memories, motives, and free will. The enemy is the Armstrong brothers, conjoined twins who seek to enforce happiness on all humanity at the nano-level through their corporation, Armstrong Fancy Gifts. The opposition is BZRK, a group of teenagers who also have control of nanotechnology, led by Sadie McClure “Plath” and “Keats,” her partner and romantic interest. BZRK operatives are given code names of famous people who went insane, because insanity is the only option, apart from victory.