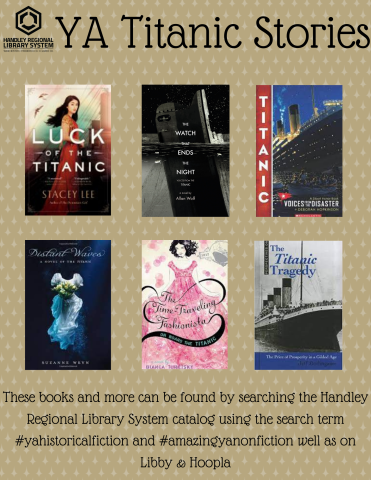 Our teen book spotlight this week is all about the Titanic!!!  It is the 110 year anniversary of the sinking of this amazing ship and for some reason, we just love learning about the ship itself and what happened even though we all know the outcome.  This voyage meant different things to all the people on board and many did not make it to their desired destination.  We have an amazing collection of fiction and nonfiction titles that explore this event from a variety of viewpoints and perspectives including some mystery, time traveling, and a novel in verse so I encourage you to read and explore this event even more because you never know what you may learn this time.  These books and more can be found by searching the catalog using the search tag #yahistoricalfiction and #amazingyanonfiction as well as on Libby and Hoopla.

Luck of the Titanic by Stacey Lee--After she's turned away at the gangplank of the "Titanic" because of the Chinese Exclusion Act, which bars her entry into the United Sates, Valora Luck is determined to find a way into the country anyway, beginning with getting on the ship. With the help of an aspiring fashion designer, she succeeds, and proceeds first to find her brother who is part of the crew. Trained in acrobatics by their deceased father, Valora hopes she and her brother can audition for the part owner of a circus aboard the ship who can sponsor their entry into the United States. Valora disguises herself to fit in among both the upper-class and lower-deck inhabitants but neither she nor anyone is prepared for the devastation to come and the fight for survival that will trump her dreams.

Distant Waves by Suzanne Weyn--Jane, one of five daughters born to a well-known spiritualist in an era when spiritualism and science were colliding, struggles to believe in her mother's clairvoyant capabilities amidst the realities of science. Jane becomes intrigued by the science of Nikola Tesla and his inventions, and this obsession introduces her to his assistant, Thad. Jane falls in love with Thad, and when she sails on the Titanic with him and her sisters, it is one of Nikola Tesla's intriguing inventions that set the stage for the disastrous sinking.

The Watch that Ends the Night by Allan Wolf--. Spotlighting both the history of the sinking and its real human impact, Allan explores the viewpoints of the ship's captain, a millionaire, a lookout, and the ship's workers, offering perspectives that span the full range of the social ladder contained within the Titanic's decks. The result is an emotional venture into these characters' stories, allowing readers to see the event through the eyes of the players themselves.

The Time-Traveling Fashionista by Bianca Turetsky--Twelve-year-old Louise Lambert accepts an invitation to a private sale of vintage clothing but upon donning an evening gown, she finds herself in 1912 aboard the Titanic as the gown's original owner, silent film star Alice Baxter.

Titanic: Voices from the Disaster by Deborah Hopkinson--In this award-winning book, critically acclaimed author Deborah Hopkinson weaves together the voices and stories of real TITANIC survivors and witnesses to the disaster -- from the stewardess Violet Jessop to Captain Arthur Rostron of the CARPATHIA, who came to the rescue of the sinking ship. Packed with heartstopping action, devastating drama, fascinating historical details, loads of archival photographs on almost every page, quotes from primary sources, and painstaking back matter, this gripping story, which follows the TITANIC and its passengers from the ship's celebrated launch at Belfast to her cataclysmic icy end, is sure to thrill and move readers.

The Titanic Tragedy by Jeff Burlingame--Provides comprehensive information on the sinking of the "Titanic." Discusses the aftermath, long-term impacts, and legacy of the tragedy. Includes a timeline, notes, and further information.