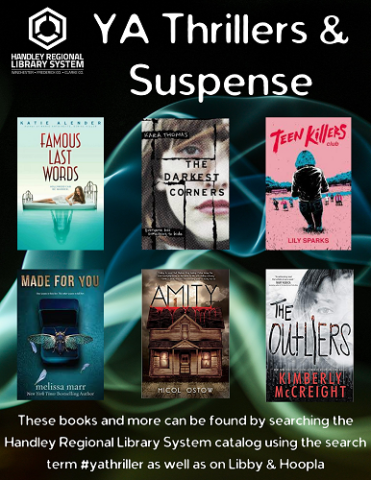 Our teen book spotlight this week is on books that are filled with thrills and suspense!!  These are the reads that are going to keep on the edge of your seat as you have no idea what is going to be on the next page.  You will find yourself holding your breath, either in fear or anticipation, and wanting to know what comes next; there may be some speechless or mouth dropped open moments.  These books and more can be found by searching the catalog using the search tag #yathriller as well as on Libby and Hoopla.  Check back next week for a new teen book spotlight and if you have any book suggestions, please let us know!!

Famous Last Words by Kate Alender--Willa looks forward to moving to Hollywood with her mother and movie director stepfather, viewing it as a chance to start over after the unexpected death of her father two years ago. But even as Willa begins making friends at her new school and adjusting to life in Tinseltown, she starts witnessing disturbing visions of corpses and cryptic messages, which appear to be linked to a series of local murders that reenact scenes from movies. Prompted by the frightful hauntings she is experiencing, Willa begins investigating the killings, and discovers that the perpetrator is much closer to home than she imagined.

Made for You by Melissa Marr--In a small southern town, Eva Tilling wakes up in the hospital with the frightening ability to see through the eyes of the victims of a serial killer, and realizes that she, too, is a target of the stalker.

The Darkest Corners by Kara Thomas--When she was eight, Tessa and her best friend Callie were witnesses in the trial that put Wyatt Stokes on death row for the murder of Callie's cousin. Tessa and her family moved to get away from it all, but now Tessa has returned and she finds Callie partying constantly in order to forget the past. Tessa has always wondered about a few things that just didn't add up about the murder, and as she and Callie reconnect they remember new things about what really happened, and both realize someone else out there is hiding the truth …

Amity by Micol Ostow--A haunted house with a violent past uses mind control to influence two teens to do its evil bidding.

Teen Killers Club by Lily Sparks--Most assume seventeen-year-old Signal Deere, a Goth-dressing kid from a trailer park, actually killed her best friend Rose. To them, it doesn't really matter that she didn't; they just want her behind bars. When she's released from juvenile detention, she doesn't have many options, so she agrees to be shipped off to a secret camp where teens are trained to be government assassins. There she meets real teen sociopaths, Erik and Javier, and aims to find out what really happened to Rose, and how she can escape to find out.

The Outliers by Kimberly McCreight--Wylie and her best friend, Cassie, got into a fight a week ago, but the first contact they make again is Cassie's simple text asking for Wylie's help. Offering only cryptic clues as to where she has gone, Cassie seems to be not only in trouble but in danger this time. Needing Jasper's help--the boy who once drove Cassie over the edge--Wylie sets out north to follow her friend's trail in the dense woods of Maine. However, finding Cassie may only be the beginning.