Teen Book Spotlight--Tales of the Real!!! 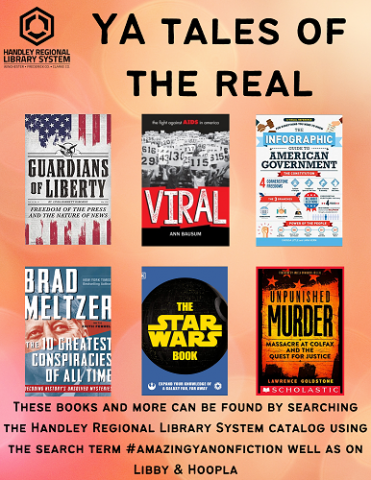 Teen Book Spotlight--Tales of the Real!!!

Our teen book spotlight this week is all about Tales of the Real!!!  We are exploring everything nonfiction which is one of my favorites to read!  With nonfiction, there is literally something for every interest and even topics you have never even heard about.  I highly suggest taking a look at the new nonfiction books when you come to the library because there is always an amazing selection--we even have a bonus selection because there were too many to choose from.  We have some great highlights this week from books all about history to movies and even some conspiracies!  These books and more can be found by searching the catalog using the search tag #amazingyanonfiction as well as on Libby and Hoopla.

The 2021 Summer Reading Program takes place from June 5th-August 11th with a new theme and badge activities every week.  Make sure to watch the Teen Book Spotlight book talk video for this week as it counts towards your badge activities for the week; if you read one of the titles featured or on the tagged list, that counts as another activity as well!!!  Earn the weekly themed badges to get your virtual tickets which can be turned into opportunities to win prizes!  For more information--such as to sign up or to sign in to your account in order to track your books and activities--visit our Summer Reading page and click “LOG IN NOW”.

10 Greatest Conspiracies of All Time by Brad Meltzer--In a riveting collection, Brad Meltzer guides us through the 10 greatest conspiracies of all time, from Leonardo da Vinci’s stolen prophecy to the Kennedy assassination. This richly illustrated book serves up those fascinating, unexplained questions that nag at history buffs and conspiracy lovers: Why was Hitler so intent on capturing the Roman “Spear of Destiny?” Where did all the Confederacy’s gold go? What is the government hiding in Area 51? And did Lee Harvey Oswald really act alone?  Meltzer sifts through the evidence, weighs competing theories, separates what we know to be true and what’s still––and perhaps forever––unproved or unprovable, and in the end, decodes the mystery and arrives at the most likely explanation.

Viral by Ann Bausum--Chronicles the history of the AIDS epidemic for younger learners. A decade after the Stonewall riots in 1969, AIDS emerged and ravaged LGBTQ communities, with little help from government officials and widely considered to be God's punishment for sexual deviance by conservative pundits. As research progressed into the epidemic, clearer truths were revealed that changed the social landscape of American society.

Mine’s Bigger Than Yours by Christopher Lombardo--A celebration of the wildest and weirdest that action cinema has to offer, the hosts of the Really Awful Movies podcast take you on a fun-filled pilgrimage through the nuttiest movies in the genre. Divided into nine chapters by subgenre, featuring stills and posters, and with a foreword by genre icon Brian Trenchard-Smith, Mine’s Bigger Than Yours is a romp through the world of fisticuffs, jailbreaks, pit fighting, mercenaries, and really big explosions—all the stuff that makes action movies great.

The Infographic Guide to American Government by Carissa Lytle--Decipher the American political system with this clear, easy-to-understand guide to the basics of the United States political system, from the founding of the thirteen colonies, to the foundations of the constitution, to how elections work. You’ll also find information about the history and context of current issues, like how Supreme Court justices are appointed; the electoral college and the popular vote; and how to get involved in the political process.

Unpunished Murder by Lawrence Goldstone--Examines the Colfax Massacre of 1873, when a band of white supremacists marched into Grant Parish, Louisiana, and murdered more than one hundred unarmed African Americans who had taken refuge in a courthouse. Tells how the case made its way to the Supreme Court, but the opinion issued by the Supreme Court denied basic human rights to African Americans and paved the way for Jim Crow laws and the next hundred years of racism in America. Illustrations include period portraits, photographs, and political cartoons.