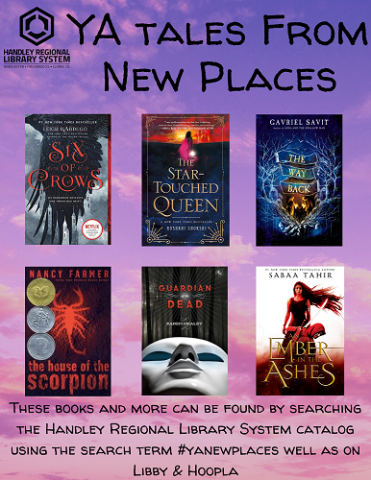 Our teen book spotlight this week is all about Tales of New Places!!!  We are taking a look at books that take place in other places that are not here; they are in other parts of the world or even in places that do not exist in the “real world” but only in “book world”.  That is one of the best things about books--they can go as far as our imaginations let them.  We have a great selection this week of fantasy, dystopian, and adventure; a mixture of stand alone titles as well as some firsts in a series.  By the time you are done reading some of these titles, you will be wishing that you could go and visit all of these places!  These books and more can be found by searching the catalog using the search tag #yanewplaces as well as on Libby and Hoopla.

The 2021 Summer Reading Program takes place from June 5th-August 11th with a new theme and badge activities every week.  Make sure to watch the Teen Book Spotlight book talk video for this week as it counts towards your badge activities for the week; if you read one of the titles featured or on the tagged list, that counts as another activity as well!!!  Earn the weekly themed badges to get your virtual tickets which can be turned into opportunities to win prizes!  For more information--such as to sign up or to sign in to your account in order to track your books and activities--visit our Summer Reading page and click “LOG IN NOW”.

Six of Crows by Leigh Bardugo--Kaz Brekker is one of the celebrities of the underworld, known as Dirtyhands for his brutal way of doing things. A councilman offers Kaz the chance at unimaginable riches, provided he can do the impossible—break a foreign chemist out of the most deadly and secure prison in the world. Kaz assembles a team of misfit specialists perfect for the task, but of course things go wrong, and soon Kaz finds himself having to escape the very prison he was to infiltrate.

The House of the Scorpion by Nancy Farmer--In a future where humans despise clones, Matt enjoys special status as the young clone of El Patron, the 142-year-old leader of a corrupt drug empire nestled between Mexico and the United States.

The Star Touched Queen by Roshani Chokshi--Maya's horoscope forecasts a marriage of Death and Destruction, but when her father, the Raja, marries her off in a political wedding to Amar of the Kingdom of Akaran, she finds other things entirely: her own voice and power in the role of queen, and desire, protection—maybe even love—as Amar's wife. However, Akaran has its secrets, and soon Maya gets caught in an ancient mystery that endangers her life and threatens the human and Otherworldly realms.

Guardian of the Dead by Karen Healey--At her boarding school in New Zealand, 17-year-old Ellie Spencer is working on a production of "A Midsummer Night's Dream" with her best friend Kevin when she encounters the handsome, enigmatic Mark Nolan and mysterious Reka Gordon, who has been cast as Titania in the play. Meanwhile, a serial killer known as the Eyeslasher continues to claim victims. With Kevin under Reka's strange spell and Mark's secrets revealed, Ellie finds herself pitted against the Maori fairy people.

The Way Back by Gavril Savit--A historical fantasy that follows Eastern European teens Yehuda and Bluma on a journey through the Far Country, the Jewish land of the dead.

An Ember In the Ashes by Sabaa Tahir--One of the conquered Scholar people, Laia lives as a slave, suppressed by the ruthless Masks who enforce the Martial Empire's laws. Laia and her grandparents and older brother know that resistance means death. However, when her brother is arrested for treason, Laia vows to save him, and that means joining the Scholar Resistance. She becomes their spy at the Empire's military academy, where she befriends the academy's greatest student, Elias. But Elias has a secret—he wants to take the Empire down, too. Laia and Elias realize their destinies are entwined, and that one, or both of them, may not survive.