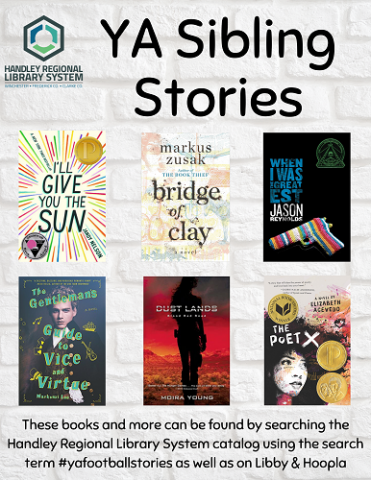 Our teen book spotlight this week is on books that feature siblings because you know family always leads to some crazy times and amazing memories!  We have a great mix of realistic, fantasy, historical, and dystopian; I love books that feature siblings because they can be featured in any genre.  These books and more can be found by searching the catalog using the search tag #yasiblings as well as on Libby and Hoopla.  Check back next week for a new teen book spotlight and if you have any book suggestions, please let us know!!

I’ll Give You the Sun by Jandy Nelson--Growing up, fraternal twins Jude and Noah were inseparable, but in their teen years something happened to tear their family apart, and the siblings each have only half the answer as to what happened. Noah tells the story from when they were 13, when he was figuring out his sexual identity and his sister Jude was playing the part of daredevil; Jude takes over the narrative when they are 16, when a boy comes between her and Noah. As healing begins between the siblings, it is a shared passion for art that pulls them together again.

The Gentleman’s Guide to Vice and Virtue by Mackenzi Lee--Henry "Monty" Montague is a British gentleman taking a grand tour of Europe in the eighteenth century alongside his best friend and secret crush, Percy. His father expects him to take over the family estate when he returns--an expectation Monty dreads--so he's determined to make the most of his yearlong trip with Percy, despite the fact that Monty's younger sister is traveling with them. But one misstep leads to an adventure beyond anyone's imagination which includes a manhunt, tomb-raiding, and pirates.

Bridge of Clay by Markus Zusak--Upon their father's return, the five Dunbar boys, who have raised themselves since their mother's death, begin to learn family secrets, including that of fourth brother Clay, who will build a bridge for complex reasons, including his own redemption.

Blood Red Road by Moira Young--Eighteen-year-old Saba lives in Silverlake, a dried-up wasteland ravaged by dangerous weather. When a monster sandstorm arrives with four cloaked horsemen, they kidnap her twin brother Lugh, and Saba's world shatters. With her younger sister, Emmi, her smart raven Nero, and handsome daredevil, Jack, she embarks on a quest to find her brother. Feeling lost without her beloved brother, she learns along the way that she is a cunning opponent, fierce fighter and unbeatable survivor.

When I Was the Greatest by Jason Reynolds--Ali is a 15-year-old boy living in a tough part of Brooklyn. Drugs and guns are common on his street, but Ali stays away from it all. Instead he hangs out with his best friend Noodles, and Noodles' older brother, Needles. The three do everything together. Needles has Tourette syndrome, but everyone on the street knows this and so forgives his sometimes insulting outbursts because they know he can't help it. However, when the three teens decide to crash a party in a different part of town, Needles' disorder may get all three in more trouble than they can handle.

The Poet X by Elizabeth Acevedo--Xiomara Batista is a teenage girl living in Harlem who's learned to use her fists to send messages. When she's invited to join her school's poetry club, she knows her religious mother will never allow it. But Xiomara is determined to find a way because she has something to say that can only be shared through her poetry.