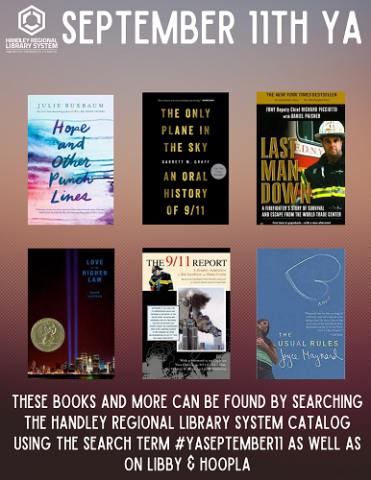 Our teen book spotlight this week is focused on books that examine the events of September 11, 2001.  As we approach the 20th anniversary of that fateful Tuesday, it is a date that should be remembered and examined as everything changed at home and abroad by the end of that day.  Books are an amazing way of not only reflecting but also learning about that day and the events that took place as many of you may not be old enough to remember what happened and is just a mention or a blip in your history class or textbook; for those of us who were alive and knew what was happening, it is something that we will never forget and can share the details of our entire day.  We have a wide selection of fiction and nonfiction, titles about that day specifically and others about what happened in the days, weeks, months, and years after that profoundly impacted the way we live today.  These books and more can be found by searching the catalog using the search tag #yaseptember11 as well as on Libby and Hoopla.  Check back next week for a new teen book spotlight and if you have any book suggestions, please let us know!!

Hope and Other Punch Lines by Julie Buxbaum--Teen Abbi Hope Goldstein lives with the notoriety of being the baby in an iconic photograph nicknamed "Baby Hope" that was captured on September 11th as the Twin Towers fell. Abbi decides to spend the summer as a counselor at Knights Day Camp to escape anyone who may know or recognize her. However, there she meets Noah Stern, who has his own connection to that fateful day. Soon the two are forced to work through difficult questions about the history behind the Baby Hope photo and deal with the answers.

Love Is the Higher Law by David Levithan--Three New York City teens express their reactions to the bombing of the World Trade Center on September 11, 2001, and its impact on their lives and the world.

The Only Plane In the Sky by Garrett Graff--In The Only Plane in the Sky, Garrett Graff tells the story of the day as it was lived—in the words of those who lived it. Drawing on never-before-published transcripts, declassified documents, original interviews, and oral histories from nearly five hundred government officials, first responders, witnesses, survivors, friends, and family members, he paints the most vivid and human portrait of the September 11 attacks yet.

The 9/11 Report: A Graphic Adaptation by Sid Jacobson--Presents the story of 9/11 in graphic novel format based on the study of the National Commission on Terrorist Attacks on the United States. Addresses the causes of 9/11 and offers recommendations to prevent another such attack.

The Usual Rules by Joyce Maynard--After thirteen-year-old Wendy learns of her mother's death at the World Trade Center, her biological father shows up without telling her he is coming, and Wendy discovers who he really is and the long list of his personal difficulties.