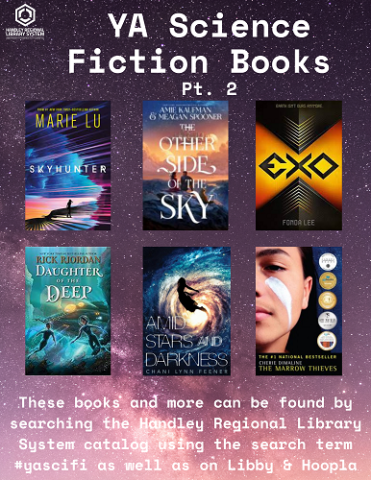 Our teen book spotlight this week is all about Science Fiction!!! What I love about Science Fiction is that there are so many different types and aspects--Science Fiction is defined as anything that could possibly happen in the future and it does not mean that it has to be in outer space even though that is a common setting.  Science Fiction can contain a number of topics from robots and artificial intelligence, to living in outer space and intergalactic wars.  We even have Science Fiction that contains some dystopian elements about how life could be extremely different in the future depending on what does or does not take place.  There is literally something for everyone in this genre!!!! These books and more can be found by searching the catalog using the search tag #yascifi as well as on Libby and Hoopla.  Check back next week for a new teen book spotlight and if you have any book suggestions, please let us know!!

Skyhunter by Marie Lu--Talin is a Striker, one of an elite fighting force that acts as the last defense for Mara, the only free nation left in the world. As a refugee, Talin has firsthand knowledge of the Karensa Federation, a world-dominating war machine that destroys nation after nation with its army of mutant beasts known as Ghosts. When a mysterious prisoner is brought from the front to the capital of Mara, Talin senses that there's more to him than meets the eye. As Talin fights with her fellow Strikers to save their home, the prisoner might be the weapon that will save or destroy them all.

Daughter of the Deep by Rick Riordan--As a freshman at the prestigious marine and aquatics science high school Harding-Pencroft, fourteen-year-old orphan Ana Dakkar and her classmates find themselves the school's only survivors when an attack destroys their school while they were en route to their end-of-year trials. Regrouping on a hidden island outpost, the freshmen learn from their teacher that the attack was perpetrated by their rival school, the Land Institute, and that the key to their survival lies in unlocking the technology of Captain Nemo's "Nautilus." Yes, both are indeed real.

The Other Side of the Sky by Amie Kaufman and Meagan Spooner--Prince North, whose home is in the sky, and the goddess Nimh, who lives on the surface, must choose between saving their people or allowing their forbidden bond to flourish.

Amid Stars and Darkness by Chani Lynn Feener--After Delaney is mistaken for an alien princess hiding on Earth, she is forced to impersonate the princess to prevent an alien war that could lead to the enslavement of all humans.

Exo by Fonda Lee--For a century now, Earth has been a peaceful colony of an alien race, and Donovan Reyes is a loyal member of the security forces, while his father is the Prime Liaison--but when a routine search and seizure goes bad Donovan finds himself a captive of the human revolutionary group, Sapience, terrorists who seem to prefer war to alien rule, and killing Donovan just might be the incident they are looking for.

The Marrow Thieves by Cherie Dimaline--In a world where most people have lost the ability to dream, a fifteen-year-old Indigenous boy who is still able to dream struggles for survival against an army of "recruiters" who seek to steal his marrow and return dreams to the rest of the world.