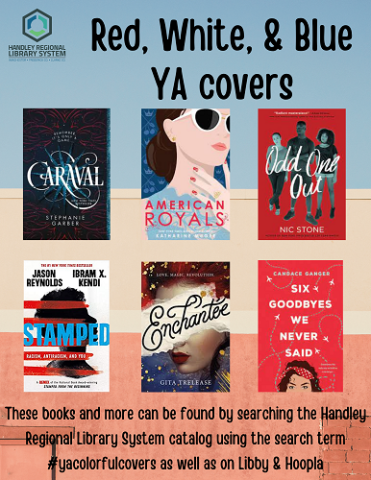 Our teen book spotlight this week is focused on books that have Red, White, and Blue Covers!!!  As we celebrate Memorial Day, let’s use the colors of our flag to help us take a look at a variety of stories!  Since we are choosing these books based on their front covers, then we have an amazing selection that are all completely different from realistic to fantasy, nonfiction, dystopian and some series starters! These books and more can be found by searching the catalog using the search tag #yacolorfulcovers as well as on Libby and Hoopla.  Check back next week for a new teen book spotlight and if you have any book suggestions, please let us know!!

Caraval by Stephanie Garber--Sisters Tella and Scarlett Dragna are invited to see Caraval, an annual performance in which the audience participates. However, when they arrive, Tella is kidnapped by Legend, the mastermind behind Caraval. Scarlett learns that this year's performance revolves around finding Tella, and whoever wins gets one wish granted. As Scarlett races to save Tella, she discovers that Caraval is more than just a game.

Stamped by Jason Reynolds--This adaptation of Ibram X. Kendi's "Stamped From the Beginning" explores the history of racist ideas in America by examining the lives of notable historical figures, from Cotton Mather and Thomas Jefferson to W.E.B. Du Bois and Angela Davis. Discusses how racist ideas spread and how they are also discredited.

American Royals by Katharine McGee--In an alternate reality in which George Washington was crowned king rather than named president, the Washington legacy has persisted for more than 200 years. Now, Princess Beatrice plans on being the first queen regnant and a ball will be held to choose her new husband. Meanwhile her tabloid-fodder sister, Princess Samantha, and Samantha's twin brother, Prince Jefferson, will make their first official public appearance. But Samantha is in love with the man who would be king--one destined for Beatrice--and Jefferson has machinations of his own.

Enchanteé by Gita Trelease--After smallpox takes their parents, seventeen-year-old Camille supports herself and her sister by magically transforming herself into a baroness in the court at Versailles, then faces difficult choices as the French Revolution looms.

Odd One Out by Nic Stone--High school junior Courtney is secretly in love with his lesbian best friend, Jupiter. When they meet new sophomore Rae, the three explore their feelings for one another in a complex love triangle where all the players are confused about who they want and the labels they put on themselves.

Six Goodbyes We Never Said by Candace Ganger--Teens Naima Rodriguez, who suffers from obsessive-compulsive disorder and generalized anxiety disorder, and Dew Brickman, who has social anxiety, bond over their mutual loss of both parents.