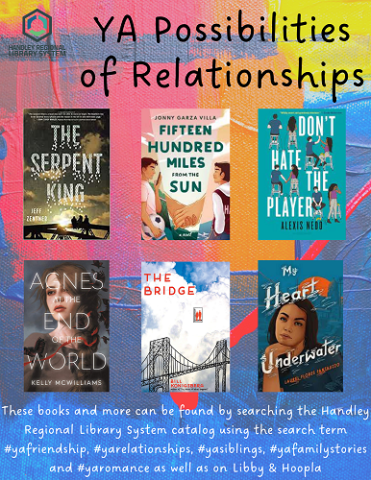 Our teen book spotlight this week is all about Possibilities of Relationships!!  We are exploring books this week that are all about what it means to have a relationship from friendship and siblings to romance and families because those all play a role in our lives and books allow us to learn and explore and then maybe implement in our own lives what we have learned.  Relationships are there to help you through the good times as well as the tough so find those people who you can lean on and share one of these titles or two.  We have an awesome selection of titles this week including some featuring eSports, dystopian, realistic, and dramatic themes.  These books and more can be found by searching the catalog using the search tags #yarelationships, #yasibilings, #yaromance, #yafamilystories, and #yafriendship as well as on Libby and Hoopla.

The Serpent King by Jeff Zentner--Dill, Lydia, and Travis are three outcast friends who are just trying to make it through their senior year. With a Pentecostal minister father imprisoned for child porn, Dill finds a certain peace in music. Travis escapes the realities of his abusive father and the pain he feels over his brother's death in a fantasy book series. And Lydia, a successful fashion blogger with plans to attend NYU, is the joyful glue that holds the three together. But when an act of violence shatters the peace they've managed to find, they'll need each other more than ever.

Agnes at the End of the World by Kelly McWilliams--Sixteen-year-old Agnes lives in a religious cult and has never questioned her faith or the words of the prophet leader. She has, however, sought outside help to obtain insulin for her brother Ezekiel, who has type one diabetes. When Agnes learns that there's a plague on the outside and that the cult leader is becoming increasingly erratic, she decides she'll need to plan an escape to save Ezekiel's life.

Fifteen Hundred Miles from the Sun by Jonny Garza Villa--Julián "Jules" Luna's plan was to graduate high school, get into UCLA, and move away from Corpus Christi, Texas, and out from under the expectations of his community that has kept his homosexuality in the closet all his life--then, with one reckless Tweet, Jules outs himself and suddenly must deal with the fallout, but at the same time finds himself with the opportunity of living his real self as Mat, his cute Twitter crush, suddenly DM's him.

The Bridge by Bill Konigsberg--A pair of suicidal teens walk onto the George Washington bridge intending to commit suicide. Aaron Boroff, is a gay teen who is lonely and depressed, and Tillie Stanley, adopted from Korea, feels she'll never live up to the expectations of those around her. The author explores four possible outcomes--they both jump, only one of them jumps, and neither jumps--discussing how their choices affect each other, strangers, and their friends and family.

Don’t Hate the Player by Alexis Nedd--As far as her parents and friends at school know, Emilia Romero is a junior, a field hockey star, and a straight A student only. She keeps that life completely separate from her life as an eSports gamer who excels at Guardians League Online with her team. Having been bullied in the past for being a girl, Emilia takes her anonymity seriously. But when an eSports tournament is held in a local arena, she can't help but participate with her team. Though a former childhood friend named Jake notices her, he promises to help keep her secret. As the tournament progresses, she appreciates Jake's friendship and begins to see him in a new light. Her prowess during the tournament though, ignites the passions of rival players who begin doxxing her, threatening her personal life and safety.

My Heart Underwater by Laurel Flores Fantauzzo--When her Filipino father enters a coma after an accident, seventeen-year-old Cory Tagubio leans on the only one she thinks understands her--her history teacher, Ms. Holden. As a Catholic, Cory knows that her feelings for Ms. Holden are forbidden, so when their relationship turns intimate and she's caught by her mother, Cory is sent away to live with a half-brother named Jun in the Philippines. Heartbroken and alone, Cory must come to terms with her identity, her family's roots, and what she wants for her future.