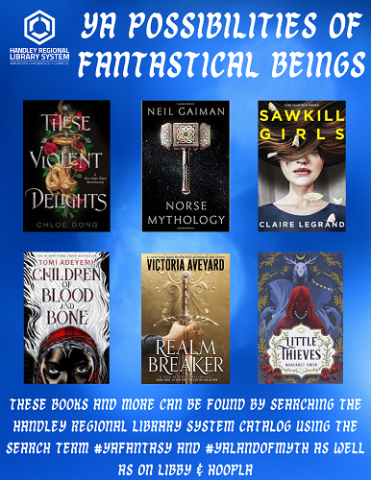 Our teen book spotlight this week is all about Possibilities of Fantastical Beings!!  We are taking a look at titles that include monsters, beings, creatures, and anything else you can imagine that is made up in fantasy and mythology.  What is amazing about these stories is that anything goes; creatures can be anything the author can imagine and then you as the reader get the chance to develop them in your imagination as well.  These books and more can be found by searching the catalog using the search tags #yafantasy and #yalandofmyth as well as on Libby and Hoopla.

These Violent Delights by Chloe Gong--When eighteen-year-old Juliette Cai takes over her family's organized crime operation known as the Scarlet Gang, she's ready to exact revenge upon their rivals, the White Flowers, and their leader Roma Montagov, her first love who broke her heart. Inexplicably, though, members of both gangs begin to come down with a madness sickness that causes suicide, forcing Juliette and Roma to call a truce to figure out who--or what--is behind the epidemic.

Children of Blood and Bone by Tomi Adeyemi--A ruthless king orders all maji killed in Orïsha, leaving seventeen-year-old Zélie Adebola motherless and alone. But as Zélie begins to discover her own power, she has the chance to free those descendants of maji called diviners—dark-skinned people with white hair—from oppression. But to do so, she must outrun the crown prince who is determined to finish what his father the king began.

Norse Mythology by Neil Gaiman--Having been inspired by these stories ever since childhood, and often using them in his fictional works, author Gaiman takes the principal tales of Norse mythology and turns them into one coherent narrative arc. Beginning with the origin of the Nine Realms, Gaiman relates the stories of Odin, Thor, Loki, and other well-known gods and goddesses of Asgard, of dwarfs and Valkyries, and of mortal men caught up in the great war between the gods and the giants, all culminating in the terrible Ragnarok, which results in a new world, new deities, and a new mankind.

Realm Breaker by Victoria Aveyard--Corayne an-Amarat's world is turned upside down when she learns she is the last of an ancient lineage, destined to save the world from destruction. She is joined by a squire, an immortal, an assassin, an ancient sorceress, a forger, and a bounty hunter as they embark on a dangerous quest to stop the evil Taristan from opening the long dormant Spindles, portals that open up to other realms.

Little Thieves by Margaret Owen--Having stolen her mistress Princess Gisele's identity, leaving her to live in poverty for the past year, former seventeen-year-old servant Vanja Schmidt uses an enchanted set of pearls to hide behind her new persona, which allows her to steal from wealthy Almandy Empire aristocrats, in the hopes of saving enough money to escape both them and the demanding gods who raised her. When a heist from a god goes wrong and she's cursed, Vanja calls on the former princess Gisele, and a group of carefully selected friends to help her undo the curse, while trying to avoid an impending marriage to a local warmonger and outwit an investigator trying to uncover the identity of the notorious thief, dubbed the Penny Phantom.

Sawkill Girls by Claire Legrand--After discovering that twenty-three girls have been kidnapped in the last 150 years, three teenage girls decide to face the evil monster that hunts on the idyllic island of Sawkill Rock. But before they can kill the monster, they must avoid killing each other.