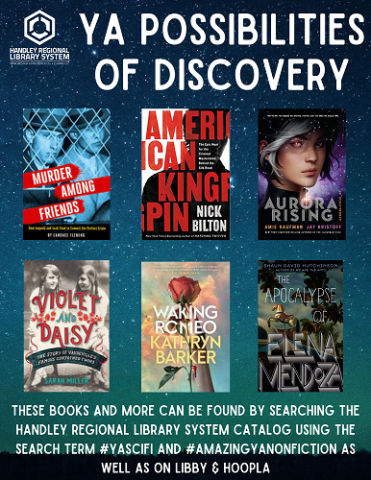 Our teen book spotlight this week is all about Possibilities of Discovery!!  We are exploring books this week that are all about reading or learning about new things in both fiction and nonfiction.  Summer is a perfect opportunity to read about something you normally would not explore as you may actually have time to read and digest what new information or themes you have explored.  Science Fiction allows you to read about things, places, or experiences we may actually have in the future while nonfiction helps us learn about times and events from the past as well as science, the arts, and more.  These books and more can be found by searching the catalog using the search tags #yascifi and #amazingyanonfiction as well as on Libby and Hoopla.

Murder Among Friends by Candace Fleming--This nonfiction narrative describes the horrific crime committed by eighteen-year-old college students Nathan Leopold and Richard Loeb. Richard, who had a relationship with Nathan, was obsessed with being known as the perfect criminal and never getting caught while committing the perfect crime. Nathan, who's sole motivation was to keep Richard as his boyfriend, assisted him in murdering Richard's fourteen-year-old second cousin. The pair were quickly apprehended when Nathan's eyeglasses were found at the scene and they both confessed to the crime. Later, the criminals' families hired defense attorney Clarence Darrow, who took on the boys' cases and saved them from receiving the death penalty.

Violet and Daisy by Sarah Miller--Explores the lives of Daisy and Violet Hilton, conjoined twins born in 1908, abandoned by their mother, and placed on exhibition. Follows the girls as they travel from Brighton, England to Australian amusement parks and to American sideshows, where they eventually became famous on the vaudeville circuit. Also discusses who Violet and Daisy were as individuals and their lives after retiring from the stage.

American Kingpin by Nick Bilton--Explores the true story of Ross William Ulbricht and how he created the Silk Road Web site on the "Dark Web," a part of the Internet that is unable to be monitored by governments, a site devoted to trading drugs, hacking software, counterfeit cash, poisons, fake passports--anything at all. Tracks the two-year manhunt for Ulbricht by governments around the world, who only knew him by his moniker, the "Dread Pirate Roberts."

Waking Romeo by Kathryn Barker--In 2083, eighteen-year-old Jules Capulet is still reeling from the end of her romance with Romeo--which left him in a coma and her a social outcast--when Heathcliff Ellis arrives from another time, on a mission to revive Romeo and possibly rewrite the future.

Aurora Rising by Amie Kaufman--In 2380, eighteen-year-old Tyler Jones, the top graduate of Aurora Academy, is left with the bottom dregs of recruits after a misguided heroic act causes him to miss the Draft. The six misfits go on their first mission as members of the Aurora Legion, an interplanetary peacekeeping coalition, but soon learn they have a stowaway--a cryogenically frozen girl named Aurora Jie-Lin O'Malley, who's been asleep for over 200 years. But the recently awakened Auri might be the catalyst for an intergalactic war millions of years in the making, and the motley crew of losers and degenerates might be the galaxy's only hope.

The Apocalypse of Elena Mendoza by Shaun David Hutchison--Sixteen-year-old Elena Mendoza, the first scientifically confirmed virgin birth, acquires the ability to heal by touch at the same time that people start disappearing in beams of light, causing her to wonder if she is bringing about the Apocalypse.