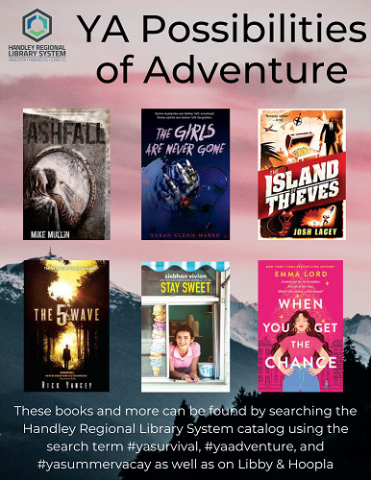 Our teen book spotlight this week is all about Possibilities of Adventure!!  We are taking a look at books that have an element of adventure to them--but that word may mean different things to different individuals.  For some, adventure could be climbing Mount Everest while to others, adventure for them may mean trying a new pizza topping for Friday night dinner; you can even live vicariously through the characters in an adventure packed story.  We have an awesome selection of titles this week including some romance, science fiction, musical inspired, and even a volcanic eruption.  These books and more can be found by searching the catalog using the search tags #yaadventure, #yasurvival, and #yasummervacay as well as on Libby and Hoopla.

Ashfall by Mike Mullin--While 15-year-old Alex Halprin's parents visit relatives in Illinois, a supervolcano under Yellowstone Park erupts, leaving the United States covered in volcanic ash. With no food or water and a rapidly-changing climate, Alex, determined to survive, sets out from Cedar Falls, Iowa, in search of his family. On his harrowing journey, Alex is joined by another survivor, Darla Edmunds, and her mother, and witnesses acts of violence as humans become desperate for resources.

The 5th Wave by Rick Yancey--Aided by an artificially engineered plague and the “Silencers” (humans placed under alien control as fetuses), aliens were able to eliminate more then seven billion people on Earth, leaving the survivors to try and pick up the pieces. Author Yancey's new sci-fi epic chronicles humanity's last stand as seen from two perspectives: 16-year-old Cassie, whose solitary life is interrupted when a mysterious figure saves her, and 17-year-old “Zombie,” who is training to become a member of the planet's last resistance against the invaders. In the beginning, the aliens carried out their genocide in four waves, beginning with an electromagnetic pulse that rendered all technology inert. Now, survivors fear the aliens' dreaded fifth wave—which might eliminate the final holdouts of humanity for good.

The Girls are Never Gone by Sarah Glenn Marsh--Dare Chase doesn't believe in ghosts, but she has to pretend she does to keep up appearances for her paranormal-investigation podcast. Her next subject is the spirit of Arthleen Bell who is said to have drowned in the lake on the grounds of Arrington Estate. But as she begins to investigate, Dare soon realizes she may have to call her own skepticism into question in order to uncover the truth about Arrington.

Stay Sweet by Siobhan Vivian--Seventeen-year-old Amelia is looking forward to working at Meade Creamery, a local ice cream stand, where she's the "Head Girl" this summer. When the owner of the stand, Molly Meade, passes away before the stand opens for the summer, Amelia isn't sure that the stand will go on until Molly's grandnephew Grady arrives and takes over the business. As Amelia deals with the changes Grady wants to make, she learns more about herself and that changes aren't necessarily a bad thing.

Island of Thieves by Josh Lacey--After 14-year-old Tom Trelawney accidentally burns down a shed in his backyard, his parents leave Tom at his Uncle Harvey's place in New York while they go on vacation. Meanwhile, Harvey is planning to leave Tom home alone and travel to Lima, Peru in search of lost treasure. Lost treasure? No way is Tom staying home. He finds a way to convince Harvey to let him tag along. Upon their arrival, Tom discovers that Harvey has messed with the wrong people and soon finds himself on the run from a Peruvian gangster.

When You Get the Chance by Emma Lord--Millie Price's dream of becoming a Broadway star faces many bumps along its road, but she is determined that nothing will stop her from achieving it--not her lovably introverted single dad, not the simmering romance she shares with drama club rival Oliver, not her intense mood swings that sometimes threaten to undo everything she has worked for. Deciding she needs an ally, however, Millie begins searching for the mother who left her dad in 2003, whom she never knew.