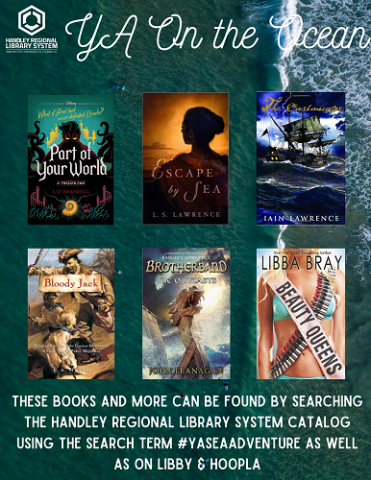 Our teen book spotlight this week is focused on books that take place in or on the ocean leading to some pretty epic adventures!  When something takes place on the open water, it leads to scenarios that are filled with danger and choices which could lead to life or death given the limited options.  We have a great selection of titles this week, ranging from historical, adventure, fantasy, stand alones and a few first in a series.  These books and more can be found by searching the catalog using the search tag #yaseaadventure as well as on Libby and Hoopla.  Check back next week for a new teen book spotlight and if you have any book suggestions, please let us know!!

Part of Your World by Liz Braswell--In this reimagining of the aftermath of Disney's "The Little Mermaid," Ariel never defeated Ursula, her father, King Triton, died, and Prince Eric's kingdom fell under the rule of the evil Ursula. Ariel lives on as the voiceless queen of Atlantica, a puppet to Ursula's rule. However, when Ariel learns her father might be still alive, she risks everything to return and find him.

Bloody Jack by L.A. Meyer--Reduced to begging and thievery in the streets of London, a thirteen-year-old orphan disguises herself as a boy and connives her way onto a British warship set for high sea adventure in search of pirates.

Escape By Sea by L.S. Lawrence--When the city of Carthage falls to the Romans during the Punic Wars, Sara, the fifteen-year-old daughter of a Carthaginian senator, must gather her grief-stricken father and take to the seas, where, with only with a meager cargo to trade, her healing skills, her wits, and her courage, Sara must face a life wildly different from anything she thought possible.

The Outcasts by John Flanagan--In a society that values strength over intellect, Hal's ingenuity, combined with the fact that his mother was a slave, sets him apart from other boys his age. As he and his peers compete in training designed to test their strength and endurance, Hal realizes he is not the only outcast and struggles to carve out a place for himself.

The Castaways by Iain Lawrence--Bad luck continues to follow Tom Tin and his mates as they find themselves aboard a formerly abandoned ship, are taught to be sailors by two black-hearted castaways they rescue, and sail to a Caribbean island where they make important new friends and enemies.

Beauty Queens by Libba Bray--En route to the Miss Teen Dream competition, a plane carrying all of the contestants crashes on a small island off the coast of Florida, leaving only fifteen of them alive. Despite initial tension between the survivors (Miss New Hampshire desperately tries to convince the others that finding food and water is more important than practicing their pageant skills), the girls soon pool their resources and work together to survive on their island prison. To make matters worse, the girls soon discover that the island is owned by the Corporation behind the pageant, and that this same Corporation is wrapped up in an illegal arms trade with an overseas dictator.