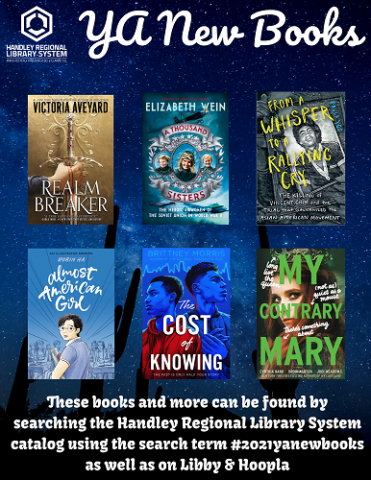 Our teen book spotlight this week is focused on books that have recently been added to our collection meaning they are new!!!!  New books are the best; they have a new book smell and there is just something about being one of the first people to read it.  We are featuring some amazing fiction and nonfiction this time including titles from a few our favorite and most popular authors!  These books and more can be found by searching the catalog using the search tag #2021yanewbooks as well as on Libby and Hoopla.  Check back next week for a new teen book spotlight and if you have any book suggestions, please let us know!!

Realm Breaker by Victoria Aveyard--Corayne an-Amarat's world is turned upside down when she learns she is the last of an ancient lineage, destined to save the world from destruction. She is joined by a squire, an immortal, an assassin, an ancient sorceress, a forger, and a bounty hunter as they embark on a dangerous quest to stop the evil Taristan from opening the long dormant Spindles, portals that open up to other realms.

Almost American Girl by Robin Ha--Robin Ha pens a graphic novel memoir about transitioning from life in Seoul, South Korea to a whole new life cut off from everything she knows in Huntsville, Alabama. When fourteen-year-old Robin and her mother vacation to Alabama to visit friends, her mother announces that she is getting married. Robin is then thrust into a culture she doesn't understand, is cut off from her Korean friends, and feels alienated in her new step-family. Worse, she is angry at the one person she's always been closest to--her mother. Then her mother enrolls her in a comic drawing class, which sparks in Robin a new sense of belonging and purpose.

A Thousand Sisters by Elizabeth Wein--Details the experiences of female Soviet combat pilots in World War II--the only women to serve in this capacity on either side. Led by Marina Raskova, three regiments of all-women flight teams suffered casualties of war along with discrimination on the ground, to make significant contributions to the war effort.

The Cost of Knowing by Brittney Morris--Sixteen-year-old Alex Rufus's curse of seeing the future distracts him from being and doing his best, but when he sees his little brother Isaiah's imminent death, he races against time, death, and circumstances to save him.

From a Whisper to a Rallying Cry by Paula Yoo--Chronicles the events leading up to and following the murder of Chinese American Vincent Chin in 1982 which sparked the Asian American movement and led to the United States' first federal civil rights trial in connection with an Asian American citizen. Examines the cultural context of the event, the act itself, the trials, and its legacy, and discusses how xenophobia and anti-Asian discrimination and violence have affected the lives of Asian Americans throughout history. Includes black-and-white photographs and a timeline.

My Contrary Mary by Cynthia Hand--Reimagines the life of Mary, queen of Scotland, as she tries to survive the intrigue, treachery, and politics of sixteenth century royal life, while hiding the fact that she can shapeshift into a mouse. The novel uses modern language and humor to depict the sixteen-year-old queen relying on her betrothed, Francis, to keep her secret and while she uses her abilities to stay one step ahead of her enemies.