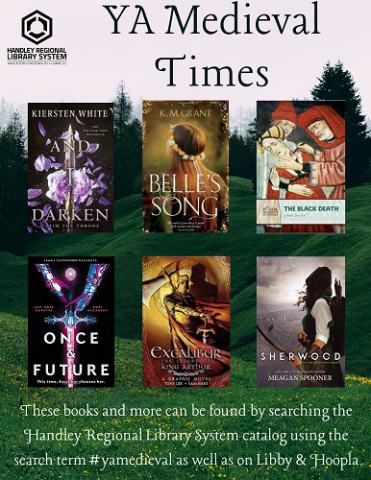 Our teen book spotlight this week is focused on books that are going to take us back in time to the land of knights and castles, jousting matches and a disease that could kill you within hours of infection--we are going back to Medieval Times!!!  All of our titles this week take place during the framework considered to be Medieval Times or the Middle Ages so we are talking the years 500-1500; this is when kings ruled the lands, there was constant fighting and battling, and King Arthur kind of took over the tales of the time.  We have some great nonfiction, graphic novels, fantasy, historical and more for you to choose from this week.  These books and more can be found by searching the catalog using the search tag #yamedieval as well as on Libby and Hoopla.  Check back next week for a new teen book spotlight and if you have any book suggestions, please let us know!!

And I Darken by Kiersten White--A princess named Lada and her younger brother, Radu, were abandoned by their father, who gave them as hostages to be raised within the walls of the very people their birthright has sworn them to fight against. And when the two form a deep friendship with the sultan's son, Mehmed, and Lada's feelings grow deeper, the three will push the limits of loyalty and love.

Once & Future by Amy Capetta and Cori McCarthy--Ari, a refugee from the planet Ketch, crash-lands on Old Earth and unwittingly retrieves a mysterious sword from a stone, which in turn reveals her to be the forty-second incarnation of King Arthur. She also awakens Merlin the magician—who has aged in reverse to present as a teenager. Initially reluctant to take the mantle, she then realizes that with her new power along with Merlin, (who is left with the unenviable task of training the headstrong Ari) she can take down the evil Mercer Corporation and bring peace to humanity.

Belle’s Song by K.M. Grant--In 1387, fifteen-year-old Belle joins Geoffrey Chaucer, his scribe Luke, squire Walter, and others on a pilgrimage from London to Canterbury to atone and pray for a cure for her father's crippling injury, but political intrigue threatens them all.

Excalibur: The Legend of King Arthur by Tony Lee--A faithful retelling in graphic novel style of Arthur Pendragon, Excalibur, and the elusive wizard Merlin. Follow King Arthur through love, betrayal, and the fate prophesied for him.

Sherwood by Meagan Spooner--Robin of Locksley is dead, and the cruel Guy of Gisborne wants to become the new lord-and Maid Marian's fiancé. In order to protect the people of Locksley town, Marian picks up Robin's cloak and sword to become Robin Hood.