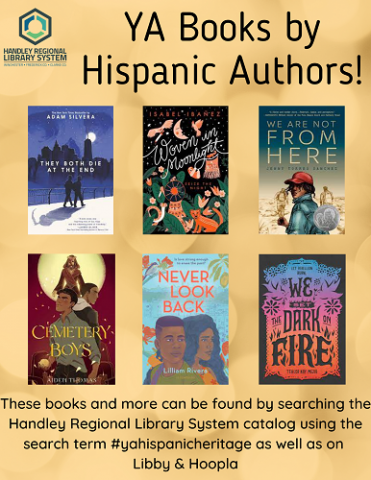 With it being Hispanic Heritage Month (September 15th-October 15th), our teen book spotlight this week is on books that are authored by Latino and Latina authors!!!  These books are amazing and so many of these authors have written more than just the titles that are being featured--so if you like this one there are others you can read as well.  Most of the titles featured are standalones so if you want a book that has a beginning, middle, and end these may be a perfect choice!  These books and more can be found by searching the catalog using the search tag #yahispanicheritage as well as on Libby and Hoopla.  Check back next week for a new teen book spotlight and if you have any book suggestions, please let us know!!

They Both Die At the End by Adam Silvera--In a near-future New York City where a service alerts people on the day they will die, teenagers Mateo Torrez and Rufus Emeterio meet using the Last Friend app and are faced with the challenge of living a lifetime on their End Day.

Cemetery Boys by Aiden Thomas--In Yadriel's Latinx family, female witches heal the living, and male sorcerers release the spirits of the dead. Transgender Yadriel is forbidden by his family from completing the ritual to be a brujo, so he enlists the help of his best friend Maritza to help him. Hoping to help the spirit of his murdered cousin Miguel, Yadriel accidentally releases the spirit of a murdered schoolmate Julian, who insists he find out who killed him. Yadriel agrees to help him and unexpectedly begins to draw closer to Julian, dreading the time when he has to go.

Never Look Back by Lilliam Rivera--A modern retelling of the myth, Orpheus and Eurydice, in which Eury leaves Puerto Rico for the Bronx, haunted by losing all to Hurricane Maria and by evil spirit Ato, and meets a bachata-singing charmer, Pheus.

We Are Not From Here by Jenny Torres Sanchez--Three Guatemalan teens, Pequena, Pulga, and Chico are caught in the web of a local gang and are desperate to seek a way out. Pulga and Chico have witnessed a murder and must join the gang or die. Pequena, has suffered abuse at the hands of the gang's leader Rey and born his child. The three close friends flee for the United States, desperate to seek sanctuary, and face a perilous journey across Mexico.

We Set the Dark On Fire by Tehlor Kay Mejia--In a dystopic society on an island split by a wall, the nation is divided between the upper- and lower-classes. At the Medico School for Girls, the young ladies are groomed to be one of two wives for prominent men. Depending on their specialization, women will either run the household or bear children. Seventeen-year-old Daniela “Dani” Vargas is at the top of her class and slated to be married--along with her friend-turned-enemy Carmen Santos--to the domineering scion of a political family. Then, a revolutionary force learns that Dani is a fraud, and that she was born low-class from the other side of the wall. They blackmail her into spying on her new family, and as conspiracies mount, Dani develops an unlikely bond with Carmen.

Woven In Moonlight by Isabel Ibanez--Ximena Rojas, who acts as a decoy for the exiled Illustrian condesa of Inkasisa, travels to the Llacsan court of King Atoc to marry him after he demands the hand of the condesa. Ximena is using the pretence as a way to infiltrate the palace to find a deadly relic used to overthrow the Illustrian rulers. After she meets a masked vigilante, a kind princesa, and a wise healer, she begins to question if restoring the rule of the Illustrians is the right path, or if the indigenous Inkasisa have the right to rule themselves.