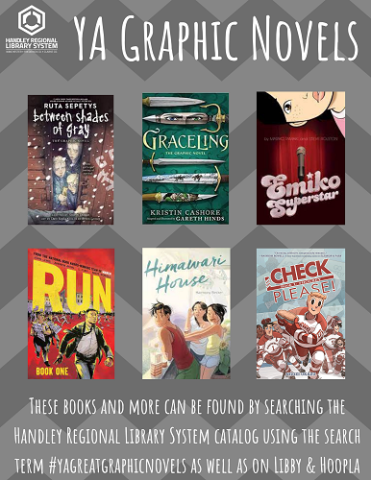 Our teen book spotlight this week is focused on graphic novels!!!  Graphic novels are incredibly visual stories that can feature pretty much anything fiction and nonfiction.  Done in the style of comic books, there is a huge variety of choices; literally something for everyone so even if you have never read one before, you will definitely be able to find something.  For our talk this week, we have a great selection of nonfiction, fantasy, historical, humor, and realistic to get you started. These books and more can be found by searching the catalog using the search tag #yagreatgraphicnovels as well as on Libby and Hoopla.  Check back next week for a new teen book spotlight and if you have any book suggestions, please let us know!!

Between Shades of Gray by Ruta Sepetys--In this graphic novel retelling of the novel, Soviet officers arrest fifteen-year-old gifted artist Lina and her family in 1941. While her father faces the death camp, Lina, her mother and younger brother get shoved onto a crowded, dirty boxcar and are deported to a Siberian work camp. Lina and her fellow prisoners must endure many difficulties--the harsh climate, unsanitary conditions, disease and hunger. At great risk, Lina documents her experiences through her meticulous drawings and passes them along to other deportees, hoping they'll reach her father in his Soviet prison. Through flashbacks of Lina's former, happy life in Lithuania, readers gain an understanding of the political events.

Run by John Lewis--Graphic novel memoir describes Civil Rights activist and former congressman John Lewis' experiences dealing with the negative consequences of being involved in the 1960s protests, such as the ensuing violence that continued to take place against blacks, the push-back from fearmongers, and the rebellion among allies who thought change didn't come quickly enough and didn't reach far enough.

Graceling by Kristin Cashore--In this graphic novel adaptation of the novel of the same name, the world of the Seven Kingdoms is brought to life, a place where children with two different colored eyes have special powers known as Graces. Once King Randa realizes his niece Katsa is graced with killing, he uses her as his ruthless enforcer throughout his realm. Katsa, however, long ago has tired of being used for evil and has formed her own underground organization working for justice. When Prince Po from a neighboring kingdom, graced with the gift of fighting, shows up searching for the truth behind his grandfather's killing, Katsa decides to leave the service of her uncle and help him in his quest. Together, they seek answers to what happened and learn a terrible secret that threatens the Seven Kingdoms.

Himawari House by Harmony Becker--Japanese American teenager Nao, arrives in Tokyo for a gap year, where she plans to learn about her heritage by attending an immersion school known as Himawari House. There she bonds with roommates Tina, who is Chinese Singporean, and Hyejung, who is Korean, and meets Japanese brothers Shinichi and Masaki. Together the friends navigate the complexities of learning the culture and language and experience foibles with learning to communicate in a new way.

Check, Please Vol. 1 by Ngozi Ukazu--Hockey player and amateur vlogger Eric Bittle chronicles his freshman and sophomore year at Samwell University, where he joins the school hockey team and falls for its very attractive but moody captain, Jack Zimmerman.