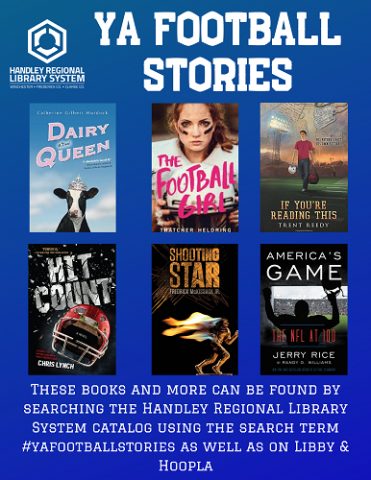 Our teen book spotlight this week is on YA Football stories since it is the start of the NFL season!!!  With a combination of fiction and nonfiction, these titles provide different aspects and perspectives of the game of football and what it takes to play the game.  These books and more can be found by searching the catalog using the search tag #yafootballstories as well as on Libby and Hoopla.  Check back next week for a new teen book spotlight and if you have any book suggestions, please let us know!!

Dairy Queen by Catherine Murdock--15-year-old D.J. Schwenk provides a first-person memoir of her fifteenth summer on her family's small Wisconsin dairy farm. D.J. comes from a family of successful football players: Her two older brothers were legends in high school, and her dad was a coach until he injured his hip. When she is asked to train Brian, a stud quarterback on the rival football team, she develops a monster crush and decides to try out for her own school's football team.

Hit Count by Chris Lynch--Arlo Brodie loves being at the heart of the action on the football field, and while his dad cheers him on, his mother quotes head injury statistics and refuses to watch, but Arlo's winning plays, the cheering crowds, and the adrenaline rush are enough to convince him that everything is OK, in spite of the pain, the pounding, the dizziness, and the confusion.

The Football Girl by Thatcher Heldring--Flag football teammates Caleb and Tessa become more than just friends the summer before they enter high school. Now Caleb is trying out for football and Tessa is supposed to try out for cross country with her two best friends. However, when Tessa decides she likes football more than running, and wants to try out with Caleb, she is torn between her dreams and others' expectations.

Shooting Star by Frederick McKissack--High school sophomore Jomo Rodgers has his sight set on becoming a great football player. The only problem is that his best friend Jayson is hogging the spotlight and grabbing the attention of college scouts with his professional-football-qualifying talent and size. Jomo decides that he just needs a little push from performance-enhancing drugs to get him where he wants to be. The changes in his body are amazing, but Jomo soon finds that his need for the drugs have some dire consequences.

If You’re Reading This by Trent Reedy--High school student Mike Wilson has been struggling to be the man of the family for his mother and his younger sister Mary ever since Mike's father, a soldier, was killed in mysterious circumstances in Afghanistan when Mike was seven. But when Mike turns sixteen, he begins receiving letters from his father, written while his father was still alive and arranged to be sent to Mike when he turned sixteen. The letters provide wisdom and encouragement, and prompt Mike to begin living fully, as well as to discover who is sending the letters and how his father actually died.

America’s Game: The NFL at 100 by Jerry Rice--Provides a comprehensive look at the first 100 years of the National Football League, tracing the history and development of the organization, and identifying notable players and coaches, key rivalries, epic events, and little-known anecdotes.