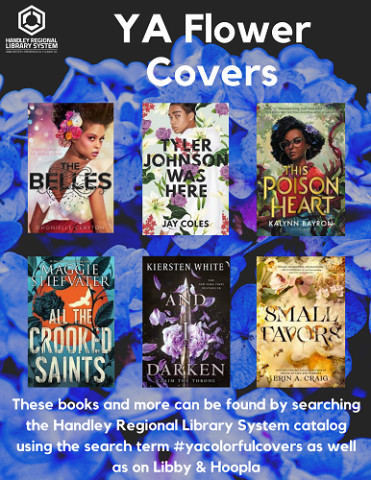 Our teen book spotlight this week is focused on books that have some Flower Covers!!!  Since it is finally Spring outside(!) we are taking inspiration from the colorful blooms and exploring books that share the same features.  As we are choosing these books based on their front covers with flowerful features, we have an amazing selection that are all completely different from one another from dystopian to fantasy and fairy tale retellings to historical and magical realism! These books and more can be found by searching the catalog using the search tag #yacolorfulcovers as well as on Libby and Hoopla.  Check back next week for a new teen book spotlight and if you have any book suggestions, please let us know!!

The Belles by Dhonielle Clayton--The Belles are young women given powers by the Goddess of Beauty to keep the citizens of Orleans beautiful and free from turning back into red-eyed monsters, which is their natural state. Sixteen-year-old Camellia Beauregard is a Belle who desperately covets the role of Queen's favorite; but another Belle is chosen, and Camellia begins to question everything she knows about the Belles.

All the Crooked Saints by Maggie Stiefvater--Everyone wants a miracle, but no one wants to do what it takes to get one. It is the 1960s in Bicho Raro, Colorado, and pilgrims come to the Soria family looking for help. The Mexican American family is known for producing saints who can cure people of their darkness; but they can only do one part, the pilgrim must do the rest because if the saint helps, his own darkness will reveal itself. When Daniel, the current saint, breaks this rule, his darkness emerges and his cousins Beatriz and Joaquin must reach out to him through Joaquin's work at an underground radio station, and help him battle the dark force that has taken over Bicho Raro.

Tyler Johnson Was Here by Jay Coles--African American teen Marvin Johnson and his twin Tyler live with their mother while their father is incarcerated. They witness police brutality, gangs, and drug activity in their poor neighborhood on a daily basis. One night Marvin follows Tyler to a party to keep an eye on him. While at the party, a shooting happens and the police arrive. Tyler goes missing in the chaos, and is later found dead. In the midst of Marvin's grief, a video surfaces online that shows Tyler was shot by a police officer. Marvin and his family fall apart and vow to get justice for Tyler.

And I Darken by Kiersten White--A princess named Lada and her younger brother, Radu, were abandoned by their father, who gave them as hostages to be raised within the walls of the very people their birthright has sworn them to fight against. And when the two form a deep friendship with the sultan's son, Mehmed, and Lada's feelings grow deeper, the three will push the limits of loyalty and love.

This Poison Heart by Kalynn Bayron--Since forever, adopted teenager Briseis Greene has known she has a magical gift for growing plants, forging seeds to vegetation with just a touch of her hand. When she unexpectedly inherits a dilapidated estate in rural New York from her birth mother's aunt, Briseis and her mothers move there for a summer reprieve. Shortly after arriving, Briseis quickly learns her gift runs in the family, discovering a walled garden on the estate with deadly plants, an apothecary, and a steady string of clients seeking elixirs. As she learns more about the estate and its dark secrets, Briseis exposes herself to a group in search of a deadly immortality elixir, and she's forced to command all she's learned about her powers to stop the group from acquiring it.

Small Favors by Erin Craig--In the secluded town of Amity Falls, Ellerie has the chance to have her secret wishes come true, but there is a price to pay in this retelling of Rumpelstiltskin.