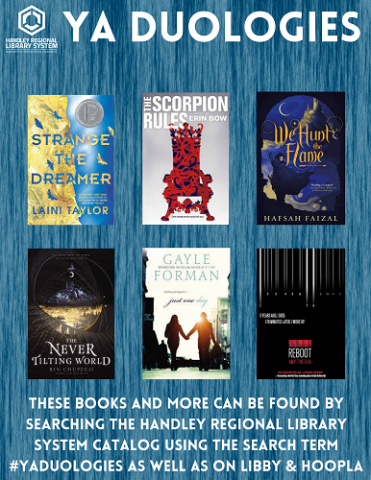 Our teen book spotlight this week is focused on books that are the first in a duology!  A duology is basically like a mini-series of books; the series is a total of two books which is perfect if you want more than one to read but not too many.  The titles for this week are the first out of the two and the duology is complete so you do not have to wait to figure out what happens at the cliffhanger ending.  While many duologies tend to be of the fantasy genre, we have some this week that are realistic and science fiction as well and even a dystopian!  These books and more can be found by searching the catalog using the search tag #yaduologies as well as on Libby and Hoopla.  Check back next week for a new teen book spotlight and if you have any book suggestions, please let us know!!

Strange the Dreamer by Laini Taylor--Lazlo Strange, war orphan and junior librarian, knows very well that “the dream chooses the dreamer, not the other way around.” However, Lazlo cannot help but feel his dream chose poorly to make him obsessed with Weep, a mythical lost city, especially when he isn't bold enough to ever search the world for it. Then an amazing opportunity presents itself when the Godslayer, a legendary hero, and his band of warriors come along to take him to Weep, where the Godslayer earned his title, and where the mysterious, beautiful, blue-skinned goddess of Lazlo's dreams may yet live.

The Never Tilting World by Rin Chupeco--After an ancient prophecy is defied, the world of Aeon, long ruled by twin goddesses, is split in two--one half in perpetual day, and the other in an endless night. The twin goddesses that rule these two parts of the world have daughters, and one day spectral forces call these two young goddesses on separate and equally dangerous journeys to the site of the Breaking that divides the world to save it.

The Scorpion Rules by Erin Bow--Princess Greta is a hostage to ensure her nation remains at peace. She must survive until her eighteenth birthday at a school for the children of the world's leaders run by machines. When new boy Elián arrives, he fights back against the system and shows Greta her own potential. The two become targets in a game that may kill them unless they work together to break all the rules.

Just One Day by Gayle Forman--Good girl Allyson has lived a sheltered life, always doing what her mother expects of her. Then she meets laid-back Dutch actor Willem and he suddenly sweeps her off her feet, taking her on a whirl-wind jaunt to Paris. Things seem to be going well, but when she wakes up the next morning, she discovers that Willem is gone and she is stranded. Back in the States, instead of taking up her old life, she embarks on a journey of self-discovery to find her own true passions, allowing her to become her own person for her own reasons. However, as her journey takes her to new and unexpected places, she ends up finding clues to that one question that won't leave her mind: What happened to Willem?

We Hunt the Flame by Hafsah Faizal--The cursed forest of the Arz is engulfing the land in evil, and seventeen-year-old Zafira, known as the Hunter, must journey into the dark forest to retrieve an ancient artifact that could restore magic to her people and fend off the Arz. However, to legitimize her efforts, she is forced to disguise herself as a man. Meanwhile, Nasir, the Prince of Death under the autocratic rule of his father the sultan, is also tasked with finding the artifact and killing the Hunter, but the hidden compassion of the prince, if revealed, could bring the punishment of his powerful father. As Nasir and Zafira race to beat each other to the powerful object, they learn that the magic is far more powerful and deadly than they both realized, and that though they are both legends in their world, neither has any wish to be so, and only want to protect their people and true identity.

Reboot by Amy Tintera--When Wren Connolly was 12, she died. After 178 minutes, the government-created virus that was in her brought her back to life to become a Reboot. Since the longer you are dead, the more emotionless and powerful you will be once you reboot, the length of time Wren was dead allowed the virus in her to mushroom. Now 17-year-old Wren 178 is one of the most deadly soldiers in the Human Advancement and Repopulation Corporation and all but a robot. However, when she is given Callum 22 to train as another HARC soldier, his lower number, and therefore his retained humanity, awakens something in Wren that she thought was long dead. Romance blossoms--and with it comes danger from HARC, which now wants both of them dead. Again.