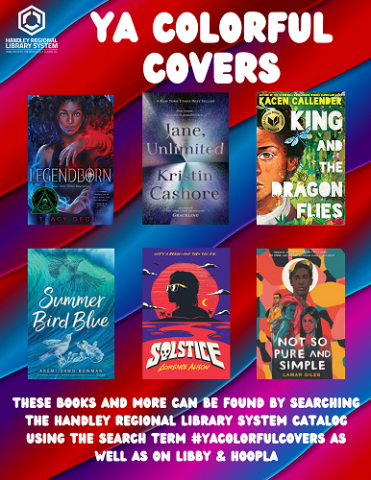 Our teen book spotlight this week is focused on books that have some amazing Colorful Covers!!!  Let’s be real here for a minute because we all judge and choose a book on the front cover (most of the time) even though we are told not to do so, but that can honestly lead us to read some books that we would not have picked up otherwise.  Since we are choosing these books based on their front covers, then we have an amazing selection that are all completely different from realistic to humor, fantasy, horror and even some award winners! These books and more can be found by searching the catalog using the search tag #yacolorfulcovers as well as on Libby and Hoopla.  Check back next week for a new teen book spotlight and if you have any book suggestions, please let us know!!

Legendborn by Tracy Dionn--Bree willingly enters an Early College program at the University of North Carolina to escape her grief and guilt after the death of her mother. Her first night on campus though, she witnesses a demonic attack and the subsequent suppression of the attack by another student. The student, who identifies himself as a "Merlin" and part of a society known as Legendborn, tries to alter Bree's memories of the event, but fails, triggering disturbing memories of the night her mother died. Now Bree is convinced that her mother's death is linked to the supernatural events, and that she must enter the society of the Legendborn if she is to find out the truth.

Summer Bird Blue by Akemi Dawn Bowman--The only thing Rumi Seto knows for certain that she absolutely wants is to go on writing music with her younger sister, Lea, for the rest of her life. Then, Lea dies in a car accident, and Rumi finds herself sent away to live with her aunt in Hawaii while her mother deals with her grief. Rumi feels the loss, abandonment, and absence of her sister, mother, and of the music, but she also meets the "boys next door," one the smiling Kai, a teenage surfer, and the other the elderly George Watanabe, a man who is dealing with his own grief. With their help, Rumi may be able to find her way back to life, and finish the song she and Lea had been working on.

Jane, Unlimited by Kristin Cashore--A recently orphaned Jane accepts an invitation from an old acquaintance, Kiran Thrash, to a gala at a sprawling island mansion called Tu Reviens. But things at Tu Reviens are not all they seem and Jane is faced with five choices that could ultimately determine the rest of her life.

Solstice by Lorence Alison--When Adri is awarded a paid trip to the Solstice Festival, she throws all caution to the wind--along with her parents' goodwill and, perhaps, her prestigious summer internship--to live a little before real life starts at law school. When she and her fellow teen partiers arrive, however, they find the island practically deserted, with nowhere to sleep and almost no porta-potties. Then, a dead body washes up on shore.

King and the Dragonflies by Kacen Callender--After twelve-year-old Kingston "King" James's brother, Khalid, passes away, King thinks he comes back to visit him in the shape of a dragonfly. Before his death, Khalid warned his brother to stay away from King's friend Charles "Sandy" Sanders because he's gay. Then Sandy goes missing and King suspects Sandy's abusive, racist father is to blame. He then finds Sandy hiding in his backyard, and the two go on an adventure to carve out a life for themselves in the Louisiana bayou among the dragonflies. Through this experience, King is forced to confront his ideas on his own identity and the truth behind his brother's death.

Not So Pure and Simple by Lamar Giles--Kiera Westing is newly single and Del Rainey, who's been crushing on Kiera since kindergarten knows this is his chance to make his move. Despite his reputation as a player, Del's clumsy advances don't appeal to Kiera so he does something drastic--he follows her to a church function where he inadvertently signs up for an eight-week Purity Pledge class. He asks for help from fellow pledger Jameer who offers to talk him up to Kiera in return for answers to some practical sex questions that the pledgers aren't allowed to ask, which then forces Del to ask some uncomfortable questions in his school's sex-ed class.