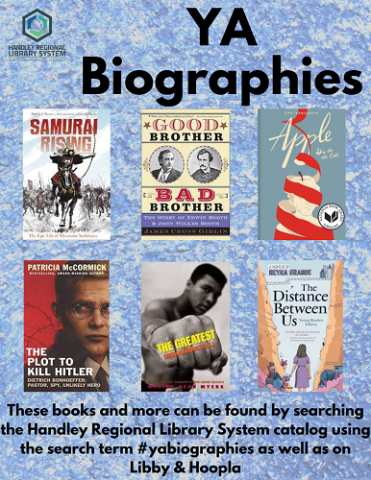 Our teen book spotlight this week is all about books which are biographies and memoirs!  Biographies and memoirs are books about individuals, each with their own unique stories to share and read.  Biographies are usually written about an individual by a different person and memoirs are written by the featured person.  Just like nonfiction, these books are so not boring (even though they get a bad rap as being that way) and we can learn so much not only about the individual but as well as the history and culture of the time as well as about ourselves. These books and more can be found by searching the catalog using the search tag #yabiographies as well as on Libby and Hoopla.  Check back next week for a new teen book spotlight and if you have any book suggestions, please let us know!!

Samurai Rising by Pamela S. Turner-Author Turner brilliantly explores the life of Minamoto Yoshitsune, a 12th-century samurai hero whose life and death was immersed in bravery and violence. Despite being raised in a Buddhist monastery after the beheading of his samurai father, Yoshitsune could not deny his warrior spirit. When his people rose up against their enemies, he threw himself into battle with a bravery that bordered on lunacy, securing his place in history as a samurai legend.

The Plot to Kill Hitler by Patricia McCormick--Traces Dietrich Bonhoeffer's involvement in the plot to assassinate Adolf Hitler during World War II. Discusses Bonhoeffer's childhood, work as a pastor and scholar, his introduction to activism, and his choice to become a spy and informant for the Allied troops.

Apple: Skin to the Core by Eric Gansworth--Memoir by the author explores issues of Native American identity, using verse and other poetic forms and reclaiming the native slur "apple," in which one is accused of being red on the outside and white on the inside. Discusses the author's experiences growing up on the reservation, his struggles with understanding his mixed tribal heritage, and reconciling his own participation in the erasure of his culture.

The Distance Between Us by Reyna Grande--Forced to live with her stern grandmother while her parents trek across the dangerous and illegal Mexican border, young Reyna and her siblings can't wait for their parents to return and build a new life for them. Things don't go as planned, however. Now Reyna has to go herself to “El Otro Lado” to live with her biological father, a man she never knew, who has haunted her imagination throughout her childhood. Living in the United States brings other challenges as well, such as figuring out her own identity and how she fits into this new world.