Surprises in the Pages of an Old Account Book 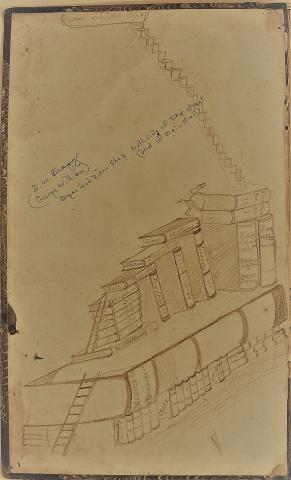 Surprises in the Pages of an Old Account Book

Are you a doodler? If you are, you might appreciate this sketch found in an account book kept by George William Bragg between 1880 and 1884. The sketch shows a fantastical landscape of giant books connected by ladders and stacks. Meanwhile, a small figure in a top hat scrambles to reach the peak via a high staircase leading to what is labelled “room at the top.”

It’s not uncommon for archivists to find sketches and doodles in the pages of manuscripts, rare books and other items in their collections. Some are detailed works of art; others are more abstract patterns. The margins of medieval manuscripts are often filled with peculiar and sometimes grotesque illustrations and, as the authors of the book about presidential doodling discovered, a number of Oval Office occupants left behind copious doodles.

Can these doodles tell us anything about their creators? Perhaps. Unfortunately, we know very little about Mr. Bragg. He was, as the inscription on this sketch shows, the owner of a piano and organ shop which we know was located in Middletown, Virginia. He was also a musician. But the first part of his account book is actually filled with notes about constitutional law, so it seems he was also interested in legal matters, politics and history. The titles of the books that make up Bragg’s doodle feature some famous authors in these fields and would suggest the same.

Bragg’s account book also spotlights another lesser known chapter in Virginia history. Bragg was involved in the gubernatorial election of 1881 and left five pages of notes about people working in the Middletown area precincts during the campaign. Bragg’s affiliation isn’t clear but this campaign was unusual in that it featured candidates from a newly formed faction of the Republican Party called the Readjusters.

The Readjusters were a mixture of Republicans, populists, freedmen, and farmers who sought to “readjust” or reduce state debt accrued before the American Civil War because they believed it threatened various state programs. William E. Cameron (1842-1897), the candidate for governor, won in an upset and served from 1881 to 1886. Other Readjuster candidates for statewide office won too. The Party’s winning streak was short-lived, however. The new state Democratic Party made gains among the populace and the Readjuster Party was defunct by 1886. According to an article in The Winchester News of November 11, 1881, the Middletown precinct in which Bragg worked voted 153 to 16 against the Readjuster Cameron.

George William Bragg’s account book can be viewed through the Stewart Bell Jr. Archives Digital Collections. Learn more about doodling in the Oval Office by reading Cabinet Magazine’s Presidential Doodles: Two Centuries of Scribbles, Scratches, Squiggles, and Scrawls from the Oval Office (2007). Read about the Readjuster Party through this article from the Library of Virginia.