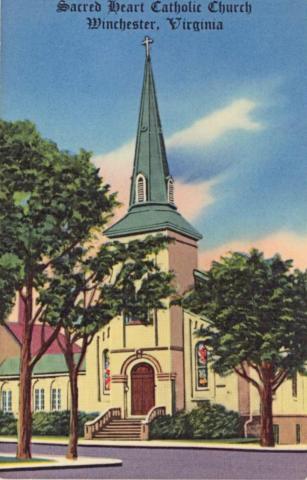 This month marks the 150th anniversary of the dedication of Winchester’s Sacred Heart of Jesus Catholic Church.  Winchester’s original Catholic Church, known as “the old stone church,” was destroyed during the Civil War, leaving Winchester without a Catholic Church building from 1864 until 1870. During this time, the priests ministering to Winchester celebrated Mass in local homes, and even at the Red Lion Tavern.  The congregation was growing with many new converts, and a new parish became a necessity.  Construction on Sacred Heart Parish began in 1868, and the first Mass was held in the basement of the incomplete building in the summer of 1870.  The construction was finally completed in 1878.  The new parish was run by a series of energetic pastors who proved themselves dedicated to meeting the needs of the local Catholic community, not just in establishing the church building, but also in establishing a school and a cemetery.  The original Sacred Heart Parish was located on Loudoun Street, but the local Catholic population eventually out-grew the building, and in 1989 the church in use today opened its doors to the congregation on Amherst Street.