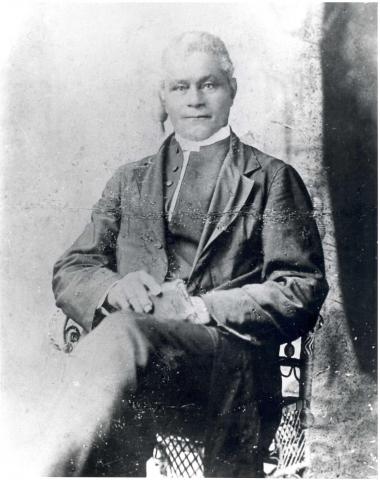 This Black History Month we commemorate Robert Orrick (1841-1902), an African American businessman and Methodist minister who left a lasting legacy in Winchester and Frederick County.

If you drive a little south of Downtown Winchester on Valley Avenue you will pass by a cemetery standing on the corner of Valley Avenue and Southwerk Street. The land on which this cemetery sits was donated by the Reverend Orrick for use by African American families who, because of segregation, were excluded from both public and private cemeteries.

Orrick was born into slavery in 1841. His owner, Joseph Cain (or Kean) allowed Orrick to start a livery business before the Civil War. Livery stables rented out horses and wagons and boarded horses for travelers. They were an essential service in any nineteenth century town.  Orrick’s business did well, and after Emancipation he continued to prosper. He built a large stable on South Braddock Street, which he operated until his death. Around 1890, possibly earlier, Orrick won a contract with the U.S. Postal Service to deliver mail from Winchester to Romney, West Virginia.

Orrick was also an ordained minister of the African Methodist Episcopal Church and often preached to African American congregations in Winchester and Frederick County. In the late 1860s, Orrick donated materials to rebuild an African American chapel in Stephens City, which is now known as Orrick Chapel.

Orrick’s hard work and business acumen made him a wealthy man, but it is for his generous contributions to the community that he is remembered.