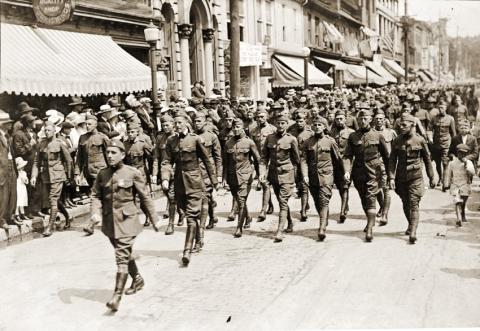 On September 2, 1919, only a few months after their return from Europe, members of Company I of the 116th Virginia Infantry marched down North Loudoun Street as part of a World War I Victory Parade.

Company I was organized at Winchester in March 1911 and formed part of the longest serving unit of the Virginia National Guard, the 116th Virginia Regiment. The regiment, formed in 1741, had participated in every major American conflict beginning with the French and Indian War.

When the United States entered World War I in April 1917 the men of Company I and their comrades in the 116th were again called to service. In August 1917, Company I mobilized at Roanoke, Virginia and from there went to Camp McClellan in Alabama for intensive training in preparation for the frontlines.

They arrived in France in late June 1918 to join General John G. Pershing’s American Expeditionary Force. Over the next few months, Company I would fight in a number of battles in what has become known as the Meuse-Argonne Offensive. The campaign was part of the final and decisive Allied offensive fought on the Western Front from September 1918 until Armistice Day on November 11, 1918.

More than one million Americans fought during the battles of the Meuse-Argonne Offensive, and there were heavy casualties. Company I lost 16 men while a further 74 soldiers were wounded in action.

On November 11, 1919, President Woodrow Wilson declared that November 11 would become a national holiday to commemorate the end of World War I and to honor the sacrifice of those who died in the conflict. Armistice Day, as it was originally called, eventually became known as Veterans Day to recognize the service of all veterans.