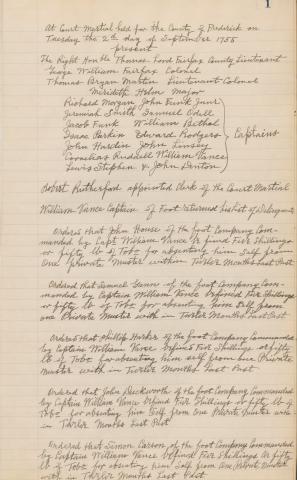 Ordered that John House of the foot Company Commanded by Capt. William Vance be fined Five shillings or fifty lbs Tobo.[tobacco]  For absenting him Self from one private muster within Twelve months last past.

John House’s name appears in a list of delinquents submitted to a court-martial in Frederick County, Virginia in September 1755.  He was among the first in the county to be subject to more stringent regulation of the militia following the outbreak of the French and Indian War in 1754.

After the first military engagements of this conflict, it became apparent to Virginia’s colonial and military leadership that raising a force adequate to the task of repelling the French from the Ohio Valley would be challenging.  George Washington, whom Governor Dinwiddie appointed Lieutenant Colonel of the Virginia Regiment in February 1754, complained frequently of the difficulty of recruiting and retaining men to the militia after he was put in charge of raising troops in Virginia’s western counties.  Few men were willing to endure the hardship of service in return for the low wages paid by the Army, and those who did were usually poor and lacked clothing, shoes and equipment.

As a result, in August 1755, the General Assembly of Virginia passed “An Act for better regulating and training the Militia."  The law improved the militia’s organization and established procedures to ensure units were properly manned and equipped.  Additionally, the law required every captain to call a private muster every three months (or more frequently) and every county’s commanding officer to call a two general musters in March and September.

Any man who failed to appear for a muster, or appeared improperly armed and equipped, would have his name added to a list kept by his captain.  This list would then be submitted to a court-martial held at the court house on the day following the September general muster.  The court had the power to release men from duty if they were judged incapable of service or for other reasons, and to levy fines.  In each case, the court offered men the choice of paying fines in either money or tobacco, an aspect of the law that reflected the value of this particular crop in the colonial economy, but which must have caused some hardship to the men in Frederick County where tobacco was not grown as much as in the Tidewater region.

In addition to providing a fascinating insight into life on Virginia’s western frontier during the French and Indian War, the courts-martial records have great value to genealogists researching early inhabitants of Frederick County.  If you are interested in George Washington’s role in the French and Indian War, and how it shaped his later military career, take a look at this web page available through the Mount Vernon website.

Researchers should be aware that the spellings of names may show irregularities because of errors in transcription and the variability of spelling in eighteenth-century documents.  While the online book is not keyword searchable, researchers can find an index of names on pages 114 to 126.