Pushing My Shelf During the Bingo Challenge 2022: Lisa 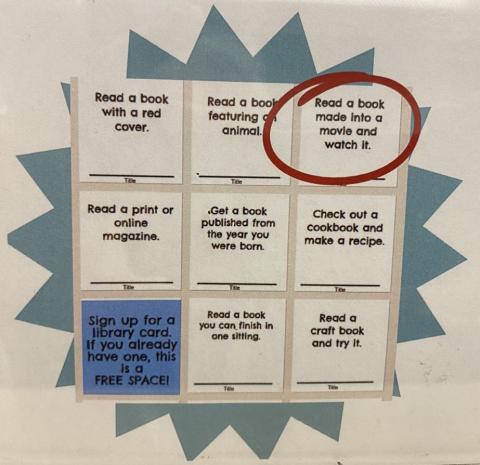 In this installment of the Pushing My Shelf  blog series, Lisa talks about some great and some not so great movies based on books.

This month we thought we would do a blog series for the Push Your Shelf Bingo Challenge. The challenge is to complete Bingo squares that “push your shelf.” In other words, read or try something that you might not ordinarily consider; something not typically found on your bookshelf. Find out more here.

To cheer you on some participating staff members* are contributing short blogs that recount their experience completing a Bingo challenge and describing how that square “pushes their shelf”.

“Read a book made into a movie and watch it.” I almost did not go for this bingo square. I have been burned before. The book Catch Me If You Can by Frank Abagnale is an amazing true story. The movie of the same name (even though it stars Leonardo DiCaprio & Tom Hanks) is one of the worst movies I have ever seen! One of the problems of transitioning a book to a movie is that in a book you are often in the character’s head. How to get that internal dialog on the screen (without a narrator) can cause problems. Depending on the length and complexity of a book, it is understandable that somethings may have to be left out of a movie. Or changed.  My cousin liked the movie News of World; she had not read the book. The movie (though pretty good) annoyed me because the filmmaker added scenes that were not in the book! The inserted scenes made the film “more Hollywood” but I don’t think it added to the story. Perhaps we have a loyalty to a book if we read it before seeing the movie?  Possibly, the one book/movie adaptation where the movie is better than the book could be Out of Africa. The book by Karen Blixen, chronicles her life in Kenya running a coffee plantation circa 1914. Her account is interesting and descriptive, but the film version provides stunning views of Kenyan wildlife and landscapes. The movie, starring Meryl Streep and Robert Redford, won an Oscar for best Picture and Cinematography (and five other Oscars) in 1985.

I’ve read and liked the books: Nomadland, The Art of Racing in the Rain, and Power of the Dog. I plan to check out each of those movies. But, since I did not read these books during March, I will not use any of them for my bingo card. I do have two contenders for my “Read a book made into a movie and watch it” bingo square. I just read the book Lilies of the Field (by William E. Barrett) which I found among the paperback classics. The book was written in 1962 and was made into a movie in 1963. The movie earned five Oscar nominations and the movie’s star, Sidney Poitier, won an Oscar for his performance. I enjoyed the book and look forward to seeing this movie. I also have the book Lady in the Van and the movie based on this book (and somewhat true story) by Alan Bennett. If I end up using this pairing for my “book/movie” bingo square, then I can use the book Lilies of the Field for my “Read in one sitting” bingo square. Good luck with your bingo squares! We are happy to help find what you need for your bingo card, and there are displays featuring some of these items.

Lisa is an Information Services Assistant at the Bowman Library.