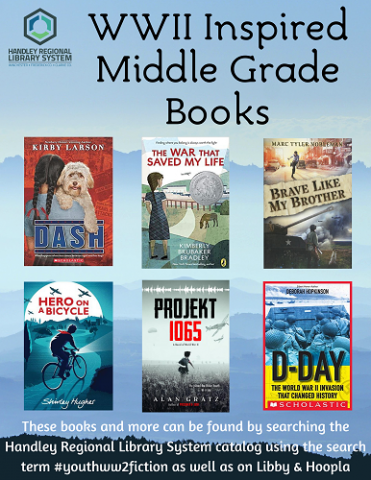 Our middle grade book spotlight this week is on books that take place during or are about World War II.  Historical fiction is so awesome because it takes us back in time and places us in other viewpoints, helping us learn more about events and people.  These books and more can be found by searching the catalog using the search tag #youthww2fiction or looking on the shelves for J 940.53/J 940.54 as well as on Libby and Hoopla.  Check back next week for a new Middle Grade book spotlight and if you have any book suggestions, please let us know!!

The War That Saved My Life by Kimberly Brubaker Bradley--Mam, ashamed of her daughter Ada's club foot, has kept Ada a prisoner in their apartment for nine years. Ada's brother, Jamie, brings Ada stories of the outside world that make her long for escape all the more. World War II arrives and the Germans begin bombing London, prompting the evacuation of all of London's children. Ada's cruel mother intends to keep her from going, but Ada escapes with the help of Jamie and ends up in the care of Miss Susan. Although Miss Susan claims she is not a nice person, her growing affection for the children is evident. However, the love between Miss Susan and the siblings may not be strong enough to carry them through the war's end, when Ada may have to return to her abusive mother.

Dash by Kirby Larson--After the Japanese attack Pearl Harbor, Japanese American Mitsi Kashino and her family are sent to an incarceration camp. Apart from all else, having to leave behind her beloved dog, Dash, is the worst for Mitsi. Thankfully, a kind neighbor agrees to take care of Dash and writes letters to Mitsi as if they were written by Dash himself. Mitsi finds comfort in these, and continues to hope for the end of the war and their reunion.

Hero On a Bicycle by Shirley Hughes--Florence, Italy, 1944: the Nazi's have taken over the city; the Allies march steadily up from the south; and 13-year-old Paolo Crivelli and his sister, Costanza, search for a way to help the Partisan resistance. Their father is missing—presumably fighting with the Partisans—while their mother reluctantly agrees to let escaped POWs hide in their home. But what can two kids with just a bicycle between them do to fight an army?

Brave Like My Brother by Marc Tyler Nobleman--When Charlie's older brother Joe is called up in 1942, Charlie learns about the tedium and dangers of war through Joe's letters--and his brother's bravery in dealing with a spy as D-Day approaches, finally gives Charlie the strength to stand up to the local bully.

D-Day: The World War II Invasion That Changed History by Deborah Hopkinson--Explores the D-Day invasion, Operation Overlord, conducted by the United States, Great Britain, and Canada on June 6, 1944, highlighting the vast amount of secrecy and years of planning it took to design and finally launch Operation Overlord. Discusses the contribution to the operation of figures like President Franklin D. Roosevelt, Prime Minister Winston Churchill, and General Dwight D. Eisenhower, as well as the important work done by African Americans, women, service members, commanders, and journalists that proved critical to the success of D-Day.

Projekt 1065 by Alan Gratz--When 13-year-old Michael O'Shaunessey's family moves from Ireland to Nazi Germany during World War II, he does his best to fit in with the other members of the Hitler Youth, but not because he believes in Hitler's cause. Michael's family are spies. Befriending the son of the man designing the Nazi's secret warplane is just part of his job. But things become increasingly complicated and dangerous when he's assigned to a group instructed to assassinate a Jewish physicist who is working on developing an atomic bomb for the Americans.