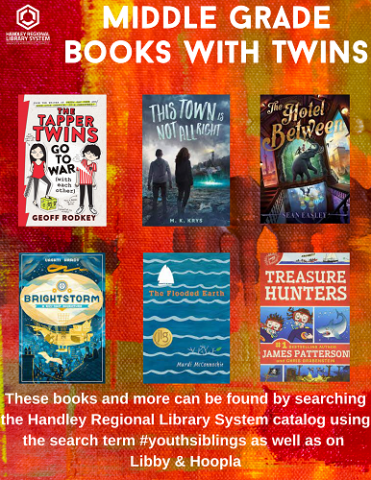 Our middle grade book spotlight this week is all about books which feature twins as main characters!  These titles are all about twins (brothers and brothers, sisters and sisters, and sisters and brothers) and their relationships which are the main focus of our amazing stories.  Twins have a unique relationship which is different from other siblings and they can be found in not just realistic titles but also in fantasy, adventure, science fiction, and dystopian--all of which we feature in our theme for this week. These books and more can be found by searching the catalog using the search tag #youthsiblings as well as on Libby and Hoopla.  Check back next week for a new middle grade book spotlight and if you have any book suggestions, please let us know!!

The Tapper Twins Go To War (With Each Other) by Geoff Rodkey--Twelve-year-old fraternal twins Claudia and Reese couldn't be more different, except in their shared determination to best one another in whatever they do. After Reese draws attention to Claudia for allegedly farting in the school cafeteria, right in front of her crush, Claudia vows to get Reese back. Thus begins a vicious prank war with increasingly clever and devastating pranks. Finally Claudia decides to hit Reese where it will hurt—in his online Minecraft-like game world that he has spent a long time building. Who will win the war?

Brightstorm by Vashti Hardy--Twins Arthur and Maudie Brightstorm undertake a dangerous journey to uncover the truth about the death of their famous explorer father, Ernest Brightstorm, and his supposed sabotage of a competitor's expedition. The siblings board the sky-ship "Aurora" captained by Harriet Culpepper and travel to South Polaris to clear their family's name.

This Town is Not All Right by M.K. Krys--Twelve-year-old twins Beacon and Everleigh move with their father to a weird fishing village, and Beacon must uncover its frightening secret before he loses his sister forever.

The Flooded Earth by Mardi McConnochie--Forty years after a flood covers half the Earth, Will, an avid sailor, stays home with his mechanic father while his twin sister Annalie leaves for a prestigious boarding school run by the Admiralty. Then the Admiralty threatens the family and the twins' father disappears, leaving behind a single coded clue. The twins and their friends set off in the family's sailboat in a quest across the ocean to find the twins' missing father. Along the way they face pirates, corrupt authorities, and dangerous storms.

The Hotel Between by Sean Easley--Twelve-year-old Cameron discovers a magical hotel through which, with the help of new friend Nico, he hopes to find his long-lost father and help for his twin sister Cass's spina bifida. But the hotel is filled with dangers that Cameron and Nico must navigate as they search for answers.

Treasure Hunters by James Patterson--Following clues left by their father, twelve-year-old twins Bickford and Rebecca Kidd sail from the Caribbean to New York City with their siblings to finish the dangerous quest of their missing world-famous treasure-hunting parents.