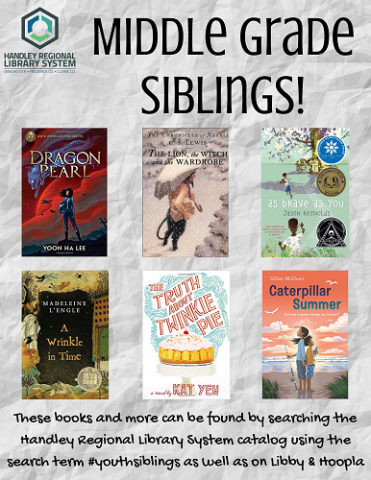 Our middle grade book spotlight this week is on books that feature siblings because you know family always leads to some crazy times and amazing memories!  We have a great mix of realistic, fantasy, and even some classics that are just as good today as they were when they first came out; I love books that feature siblings because they can be featured in any genre.  These books and more can be found by searching the catalog using the search tag #youthsiblings as well as on Libby and Hoopla.  Check back next week for a new middle grade book spotlight and if you have any book suggestions, please let us know!!

Dragon Pearl by Yoon Ha Lee--Min, a thirteen-year-old girl with fox magic, stows away on a battle cruiser and impersonates a cadet. Her objective is to solve the mystery of what happened to her older brother in the Thousand World Space Forces, as he has been accused of abandoning his battle cruiser to search for a mystical object called the Dragon Pearl. In her quest to find her brother and clear his name, Min has to use her fox magic to fight off gamblers, pirates, and ghosts.

A Wrinkle In Time by Madeleine L’Engle--Meg Murry and her friends become involved with unearthly strangers and a search for Meg's father, who has disappeared while engaged in secret work for the government.

The Lion, the Witch, and the Wardrobe by C.S. Lewis--Four English school children find their way through the back of a wardrobe into the magic land of Narnia and assist Aslan, the golden lion, to triumph over the White Witch, who has cursed the land with eternal winter.

The Truth About Twinkie Pie by Kat Yeh--Sisters Galileo Galilei (she'll kill you if you don't call her GiGi) and Delta Dawn (call her DiDi) are making it on their own. GiGi is the brainy 12-year-old, while her older sister DiDi is the junior-high-dropout who has become a hairstylist to earn money for GiGi's college fund. The sisters care for one another in the absence of any parents, and after DiDi wins a million dollars in a cooking contest, they finally get out of their shabby trailer park and move to the Gold Coast of New York. Now DiDi can send GiGi to a good school in order to get a degree and keep the good times rolling. Hoping to excel, GiGi creates a “Recipe for Success” to follow, but things don't go as planned when a cute boy and an unexpected romance get thrown into the mix.

As Brave As You by Jason Reynolds--When 11-year-old Genie and his older brother Ernie are sent away from their home in Brooklyn to spend a month with their estranged grandfather in rural Virginia, Genie finds himself facing the perplexity of what it means to become a man. Surprised by his grandfather's ability to function so well despite his blindness, Genie thinks his grandfather might be the bravest man he's ever met. But when he realizes his grandfather never leaves his home, he wonders what bravery truly is.

Caterpillar Summer by Gillian McDunn--Since her father's death, Cat has taken care of her special-needs brother, Chicken, for their hard working mother, but while spending time with grandparents they never knew, Cat has the chance to be a child again.