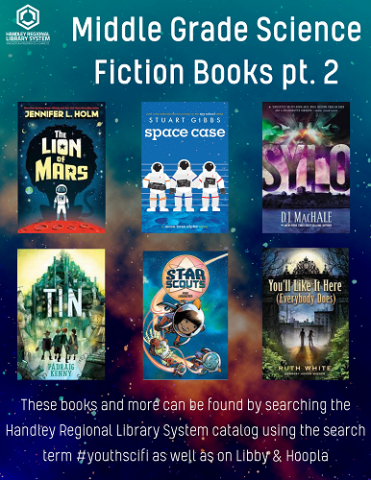 Our middle grade book spotlight this week is all about Science Fiction!!!  What I love about Science Fiction is that there are so many different types and aspects--Science Fiction is defined as anything that could possibly happen in the future and it does not mean that it has to be in outer space even though that is a common setting.  Science Fiction can contain a number of topics from robots and artificial intelligence, to living in outer space and intergalactic wars.  We even have Science Fiction that contains some dystopian elements about how life could be extremely different in the future depending on what does or does not take place.  There is literally something for everyone in this genre!!!!  These books and more can be found by searching the catalog using the search tag #youthscifi as well as on Libby and Hoopla.  Check back next week for a new middle grade book spotlight and if you have any book suggestions, please let us know!!

The Lion of Mars by Jennifer L. Holm--Eleven-year-old Mars colonist Bell, lives with his American family in a self-sustaining, but isolated community. Warned numerous times by the adults not to interact with colonies from other countries, Bell has obeyed, content with caring for his cat and eating cake. When the adults suddenly get sickened with an unknown ailment, Bell and the other kids living in the community must decide how important breaking the rules are in order to survive.

Tin by Pádraig Kenny--In an alternate England in the 1930s, Christopher works as an assistant to an engineer who makes illegal mechanicals, or robots covered by synthetic skin. When Christopher finds out that he is a mechanical himself, he is taken away by a government agency. Afraid for his safety, his mechanical family sets out to rescue him with the help of the famous engineer who created him.

Space Case by Stuart Gibbs--Twelve-year-old Dashiell "Dash" Gibson, living on Moon Base Alpha, learns that base scientist Dr. Holtz has been found dead on the lunar surface. Dash suspects foul play, but no one believes him; so he investigates the death himself.

Star Scouts by Mike Lawrence--Accidentally abducted by an alien named Mabel, Avani joins Mabel at Camp Andromeda, a camp for Star Scouts where she has the adventure of a lifetime.

Sylo by D.J. MacHale--"How safe is it to remain uninvolved?" This question begins 14-year-old Tucker Pierce's story. On Pemberwick Island, Maine, Tucker is perfectly fine with being status quo. He's a bench warmer for the high school football team and just likes hanging out with his friends and working for his father's landscaping business. However, his picture-perfect life is upended when the island is quarantined by a mysterious government agency, SYLO, and people begin dying. After Tucker and his friend, Tori, are captured and imprisoned, Tucker decides that it's time to do something big.

You’ll Like it Here (Everybody Does) by Ruth White--Although Meggie Blue seems to be an average sixth-grader she is abnormally frightened when residents of her small, North Carolina town become fixated on aliens, and soon she and her family are forced to flee, making it clear that all is not as it seems.