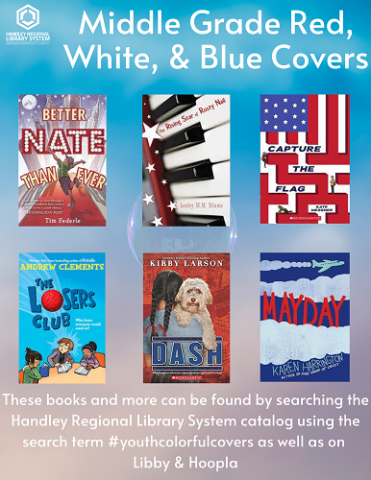 Our Middle Grade book spotlight this week is focused on books that have Red, White, and Blue Covers!!!  As we celebrate Memorial Day, let’s use the colors of our flag to help us take a look at a variety of stories!  Since we are choosing these books based on their front covers, then we have an amazing selection that are all completely different from realistic to fantasy, mysteries, humor, and books turned to movies!   These books and more can be found by searching the catalog using the search tag #youthcolorfulcovers as well as on Libby and Hoopla.  Check back next week for a new Middle Grade book spotlight and if you have any book suggestions, please let us know!!

Better Nate than Ever by Tim Federle--Thirteen-year-old Nate Foster longs to leave Jankburg, Pennsylvania for New York City, where he dreams of starring on Broadway. When he discovers that there is an audition for "E.T." the musical, Nate seizes this once-in-a-lifetime opportunity and sets off to New York on a Greyhound bus without his parents' consent or knowledge. Upon his arrival, Nate falls in love with the city and all it has to offer.

The Losers Club by Andrew Clements--When Alec's teacher warns him about reading his book and not paying attention in class, Alec decides to create a club after school for the express purpose of silent reading, calling it the Losers Club. He doesn't expect anyone else to join, and is surprised at its popularity…and at how much he enjoys interacting with others.

The Rising Star of Rusty Nail by Lesley M.M. Blume--In the small town of Rusty Nail, Minn., during the Red Scare era of the early 1950s, the musically talented 10-year-old Franny recognizes her talent on the piano after showing up prissy rich-girl Nancy in a school assembly. Desperate for a piano teacher who does more than smoke and snore away each lesson, Franny latches onto newcomer Olga Malenkov, a famous Russian musician. But Franny has an uphill battle ahead of her in order to endear herself to the town's new "commie."

Dash by Kirby Larson--After the Japanese attack Pearl Harbor, Japanese American Mitsi Kashino and her family are sent to an incarceration camp. Apart from all else, having to leave behind her beloved dog, Dash, is the worst for Mitsi. Thankfully, a kind neighbor agrees to take care of Dash and writes letters to Mitsi as if they were written by Dash himself. Mitsi finds comfort in these, and continues to hope for the end of the war and their reunion.

Capture the Flag by Kate Messner--When the original Star Spangled Banner is stolen, seventh-graders Anne, José, and Henry, all descendants of the Silver Jaguar Society, pursue suspects on airport carts and through baggage handling tunnels while stranded at a Washington, D.C., airport during a snowstorm.

Mayday by Karen Harrington--After his uncle in the army is killed overseas, Wayne Kovok and his mother travel by plane to Arlington for his funeral. On the way back, their plane crashes, and in the aftermath Wayne loses his voice. Wayne used to love recounting all the facts he had memorized, like the statistics on vending machine deaths versus shark attack deaths. He had plans of wooing the prettiest girl in school with his facts and voice, but now how can he? How can he stand up to his drill-sergeant grandfather? His voicelessness forces Wayne to rethink who he is, who he wants to be, and just what exactly he wants to say.