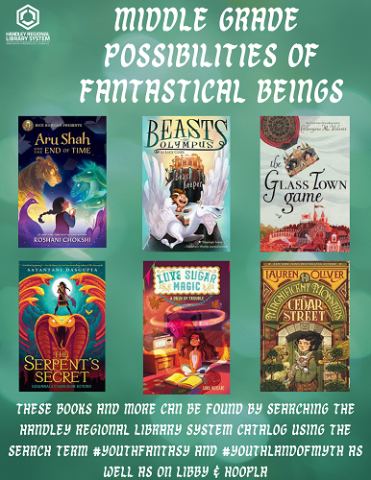 Our middle grade book spotlight this week is all about Possibilities of Fantastical Beings!!  We are taking a look at titles that include monsters, beings, creatures, and anything else you can imagine that is made up in fantasy and mythology.  What is amazing about these stories is that anything goes; creatures can be anything the author can imagine and then you as the reader get the chance to develop them in your imagination as well.   These books and more can be found by searching the catalog using the search tag #youthfantasy  and #youthlandofmyth as well as on Libby and Hoopla.

The 2022 Summer Reading Program Oceans of Possibilities is taking place from June 4th-August 10th with a new theme and badge activities every week.  Make sure to watch the Middle Grade Book Spotlight book talk video for this week as it counts towards your badge activities for the week; if you read one of the titles featured or on the tagged list, that counts as another activity as well!!!  Earn the weekly themed badges to get your virtual tickets which can be turned into opportunities to win prizes!  For more information--such as to sign up or to sign in to your account in order to track your books and activities--visit our Summer Reading page and click “LOG IN NOW”.

Check back next week for a new middle grade book spotlight and if you have any book suggestions, please let us know!!

Aru Shah and the End of Time by Roshani Chokshi--Twelve-year-old Aru exaggerates her family's status in order to fit in at her private school. But when three classmates come to the Museum of Ancient Indian Art and Culture--where Aru actually spends most of her time--she is dared to prove an ancient lamp is cursed, and inadvertently frees an ancient demon.

The Serpent’s Secret by Sayantani DasGupta--Up until her twelfth birthday, Kiranmala considered herself an ordinary sixth-grader in Parsippany, New Jersey, but then her parents disappear and a drooling rakkhosh demon shows up in her kitchen, and soon she is swept into another dimension, full of magic, winged horses, talking birds (very annoying), and cute princes--and somehow Kiranmala needs to sort it all out, find her parents, and basically save the world.

Beast Keeper by Lucy Coats--Eleven-year-old Demon had never met his father, the god Pan, until the day he was whisked away to the stables of Olympus and charged with looking after all of the mythical creatures there, a task which is complicated by the tempestuous gods and goddesses and Heracles, who keeps killing the immortal beasts.

A Dash of Time by Anna Meriano--Leonora's family owns a popular bakery in Rose Hill, Texas, and they are busy preparing sweets for the annual Dia de los Muertos festival. Leo wants to help but she's told she's too young. Then Leo discovers that her mother, aunt, and four older sisters are brujas, Mexican witches, and they are putting magic into their baked goods. Leo is determined to follow their example, and when her best friend Caroline has a problem, Leo tries to help with a little spell of her own.

The Glass Town Game by Catherynne Valente--The Brontë sisters, Charlotte and Emily, are traveling to a boarding school when the train magically whisks them to a magical land that existed only in the games the Brontë sisters played as children in an imaginary land called Glass Town. And as their imaginations come to life, the girls learn that their other two sisters have been abducted and must race to rescue them and keep an evil Napoleon from escaping Glass Town and taking over England.

The Magnificent Monsters of Cedar Street by Lauren Oliver--Cordelia Clay and her veterinarian father live and work in their nineteenth-century Boston clinic and secretly take care of mythical creatures. One day, Cordelia wakes to discover that her father has been abducted along with most of their creatures. Following a cryptic note and mysterious clues, Cordelia and a small group of "monsters" go on a quest to rescue them.