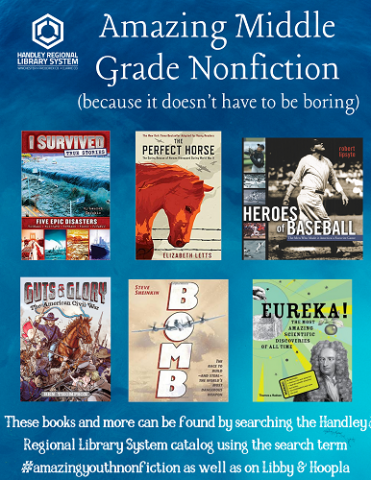 Our middle grade book spotlight this week is on books that are all nonfiction!  Nonfiction does not have to be boring and these books are going to prove it; they can be fun and exciting.  The titles featured this week are just a few of the amazing nonfiction books we have here at the Library.  These books and more can be found by searching the catalog using the search tag #amazingyouthnonfiction as well as on Libby and Hoopla.  Check back next week for a new Middle Grade book spotlight and if you have any book suggestions, please let us know!!

I Survived: Five Epic Disasters by Lauren Tarshis--Presents true accounts of children surviving five famous catastrophes: the 2011 Japanese tsunami, the 1912 sinking of the Titanic, the Children's Blizzard of 1888, the 2013 Henryville, Indiana tornado, and the 1913 Great Molasses Flood in Boston. Includes disaster facts and a list of additional resources.

Guts and Glory: The American Civil War by Ben Thompson--Presents an overview of the American Civil War that brings the war to life through stories of heroic figures and daring deeds. Features black-and-white photographs and illustrations, and dozens of primary source quotes.

Bomb: The Race to Build and Steal the World’s Most Dangerous Weapon by Steve Sheinkin--It was in December of 1938 that German chemist Otto Hahn experimented with uranium. Almost by accident, he found that uranium atoms split when put next to radioactive material. When word got out, physicists and chemists across the United States, Great Britain, Germany, and the Soviet Union raced to find a way to make a bomb by splitting the atom. The KGB installed their spies, physicists were hidden away in secret laboratories in deserts like Los Alamos, and the Allies began searching for and destroying German heavy-water manufacturing plants.

The Perfect Horse: The Daring Rescue of Horses Kidnapped During World War II by Elizabeth Letts--When American troops learned that the Nazis kidnapped the world's finest horses during World War II, they set out on a rescue mission in the hopes of preventing them from being slaughtered by Russian troops for food. Includes a map and archival photographs.

Heroes of Baseball by Robert Lipsyte--Meet the men who were and remain the heroes of baseball. These are men who did more than hit home runs or pitch perfect games--they changed the way our society perceives itself, and the goals we set for ourselves and our nation.

Eureka!  The Most Amazing Scientific Discoveries of All Time by Mike Goldsmith--Examines some of the most important scientific discoveries and the scientists who discovered them, such as Nicolaus Copernicus and his heliocentric theory of the solar system, Marie Curie and her use of radioactivity, and Georges Lemaitre and his theory of the big bang.