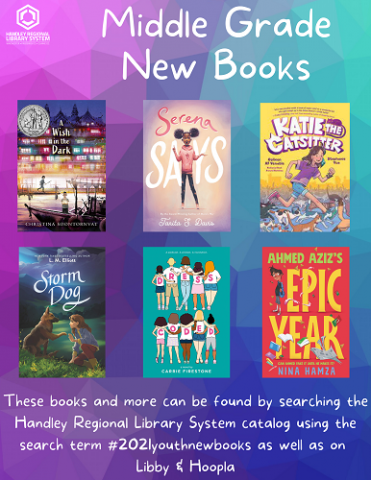 Our Middle Grade book spotlight this week is focused on  books that have recently been added to our collection meaning they are new!!!!  New books are the best; they have a new book smell and there is just something about being one of the first people to read it.  There is a great mix of fantasy, realistic, adventure, and graphic novels this week; there is literally something for everyone!  These books and more can be found by searching the catalog using the search tag #2021youthnewbooks as well as on Libby and Hoopla.  Check back next week for a new Middle Grade book spotlight and if you have any book suggestions, please let us know!!

A Wish In the Dark by Christian Soontornvat--All of the light in Chattana is made by one man, the Governor. The magical lights represent freedom for Pong, who was born in Namwon Prison and he dreams of walking among them. But when Pong escapes from Namwon, he discovers that the outside world is just as unfair as life in the prison. Nok, the prison warden's daughter, searches for Pong in order to restore her family's good name, but she uncovers secrets that make her question everything she's believed. When Nok and Pong find each other, they set out to make things right.

Serena Says by Tanita S. Davis--Serena St. John loves being known as the best friend of JC, her outgoing, life-of-the-party friend. When JC goes in for a kidney transplant, and Serena is sidelined from seeing her due to a cold, their reunification is hampered by the appearance of a new best friend. Suddenly on her own, Serena flounders without JC and pours her time into her vlogs, hoping to be selected as class reporter. Even though she knows she's not as outspoken as her former friend, Serena gets better with practice and learns that she, too, has a voice.

Storm Dog by L.M. Elliott--The only person who understands Ariel is her brother, but he's been deployed to Afghanistan. Her father has been off in his own world since her brother left, her mother is focused on Ariel's gorgeous older sister, Gloria, and Gloria has just been selected to be an Apple Blossom Parade princess. The only place Ariel feels at home is wandering the Blue Ridge Mountains around her house and watching the spring storms. During one of those storms, Ariel finds a lost dog who leads her to the cabin of Sergeant Josie, a former K-9 handler in the Army. After coming up with a crazy plan involving music, dog-dancing, six dogs from the local shelter, and the upcoming Apple Blossom Parade, Ariel begins to discover who she really is.

Dress Coded by Carrie Firestone--Middle schooler Molly Frost starts a podcast in protest of her school's unfair dress code policies, which disproportionately affect young girls, especially those with curvy bodies. When her podcast gains notoriety, she faces not only bullying, but also the scrutiny of the local school board.

Katie the Catsitter by Colleen AF Venable--Twelve-year-old Katie is dreading the boring summer ahead until she realizes the mysterious neighbor who hired her to catsit is one of the city's greatest supervillains.

Ahmed Aziz’s Epic Year by Nina Hamza--Ahmed Aziz's epically bad year started when he turned twelve and his family moved from Hawaii to Minnesota so that his father could receive treatment for an illness. As one of the only kids of color in his new school, Ahmed becomes the target of a bully. However, as much as he hates to admit it, he does actually like his English teacher and he's enjoying learning about his deceased uncle and his family's Indian Muslim heritage. Now, if he only knew how to make Minnesota less frigid, he may warm up to the place.