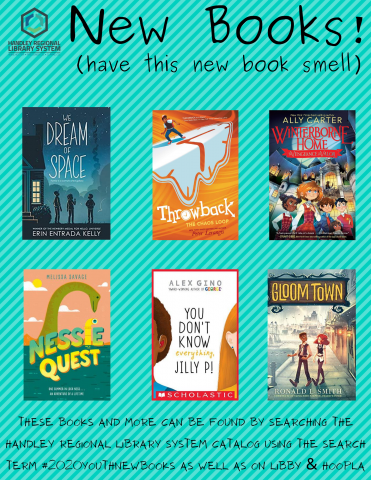 Our middle grade book spotlight this week is on new books, because let’s be honest--there is just something about a new book smell!  The titles featured in this week’s book talk (and listed below) are titles that are new to us at the Handley Regional Library System over the past couple of months.  These books and more can be found by searching the catalog using the search tag #2020youthnewbooks as well as on Libby and Hoopla.  Check back next week for a new Middle Grade book spotlight and if you have any book suggestions, please let us know!!

We Dream of Space by Erin Entrada Kelly--In 1986, Cash, Fitch, and Bird Thomas are in seventh grade. Cash loves basketball, but just broke his wrist and is in danger of failing seventh grade for the second time. Fitch spends every afternoon at the local arcade and deals with an explosive temper. His twin sister, Birdie, dreams of being NASA's first female shuttle commander, but feels like she's disappearing. They all exist in their own little orbits in their tense home, with little in common. But after the disastrous launch of the Space Shuttle Challenger, their lives change in unexpected ways.

Throwback: The Chaos Loop by Peter Lerangis--As a time-traveling "throwback," thirteen-year-old Corey begins to notice that jumping around through eras is changing him. He and his friend Leila decide to make a big impact by attempting to assassinate Adolf Hitler before he comes to power.

Nessie Quest by Melissa Savage--Ada Ru finally thought her parents were going to agree to a Fitzhugh family vacation in Disney World the summer before sixth grade, until her father announces he's taking a teaching position in Scotland, and moving the family there for the entire summer.  Ada Ru is anything but happy. She doesn't like their new home, she hates haggis, and she certainly doesn't like the idea that she will be away from her best friend all summer. To top it all off, there is said to be a monster in the lake near their house!  That's when she meets Hamish Bean Timmy, Hammy Bean for short, captain of the Nessie Quest Monster Chaser boat tour. He knows everything there is to know about the fabled Loch Ness Monster and Scotland. But as the two unlikely friends embark on an epic adventure to spot the lake monster, they end up discovering more than they ever could have imagined.

You Don’t Know Everything, Jilly P! by Alex Gino--When her new baby sister is born deaf, Jilly makes an online connection with a fellow fantasy fan, who happens to be black and deaf, and begins to learn about the many obstacles that exist in the world for people who are different from her.

Winterbourne Home For Vengeance and Valor by Ally Carter--April didn't mean to start the fire. She wasn't the one who broke the vase. April didn't ask to go live in a big, creepy mansion with a bunch of orphans who just don't understand that April isn't like them. After all, April's mother is coming back for her someday very soon.  All April has to do is find the clues her mother left inside the massive mansion. But Winterborne House is hiding more than one secret, so April and her friends are going to have to work together to unravel the riddle of a missing heir, a creepy legend, and a mysterious key before the only home they've ever known is lost to them forever.

Gloom Town by Ronald Smith--Twelve-year-old Rory and his friend Izzy try to foil the plans of Lord Foxglove, for whom Rory works as a valet, and his inhuman accomplices from taking over the world.