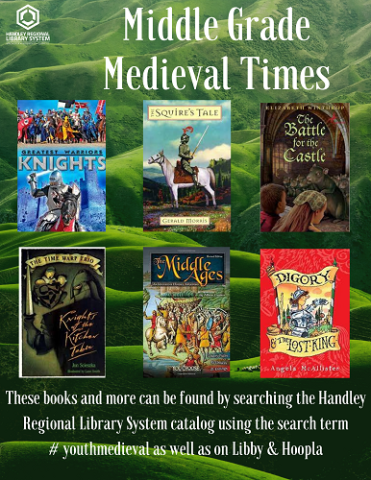 Our Middle Grade book spotlight this week is focused on books that are going to take us back in time to the land of knights and castles, jousting matches and a disease that could kill you within hours of infection--we are going back to Medieval Times!!!  All of our titles this week take place during the framework considered to be Medieval Times or the Middle Ages so we are talking the years 500-1500; this is when kings ruled the lands, there was constant fighting and battling, and King Arthur kind of took over the tales of the time.  We have some great nonfiction, interactive adventures, fantasy, historical and more for you to choose from this week.  These books and more can be found by searching the catalog using the search tag #youthmedieval as well as on Libby and Hoopla.  Check back next week for a new Middle Grade book spotlight and if you have any book suggestions, please let us know!!

Knights by Peter Hepplewhite--Details the armor, weapons, and fighting techniques used by medieval knights. Details the place they held within medieval society and includes color photographs, a glossary, and further reading sources.

Knights of the Kitchen Tables by Jon Scieszka--Joe, Fred, and Sam are transported to a time when evil knights, fire-breathing dragons, and vile-smelling giants roamed the land.

The Squire’s Tale by Gerald Morris--In medieval England, fourteen-year-old Terence finds his tranquil existence suddenly changed when he becomes the squire of the young Gawain of Orkney and accompanies him on a long quest, proving Gawain's worth as a knight and revealing an important secret about his own true identity.

The Middle Ages: An Interactive History Adventure by Allison Lassieur--Provides interactive adventures taking place during the Middle Ages where the reader chooses from various roles, possible scenarios, and endings. Includes illustrations, a time line, a glossary, and sources for additional information.

The Battle for the Castle by Elizabeth Winthrop--Twelve-year-old William uses the magic token to return, through the toy castle in his attic, to the medieval land of Sir Simon, which is now menaced by a skeleton ship bearing a plague of ravenous rats.

Digory and the Lost King by Angela McCallister--After having inadvertently acquired the reputation of being a brave young knight, Digory, now also a prince living in the castle, goes in search of the missing King Widget and finds his life complicated even further when he is mistaken for a wizard.