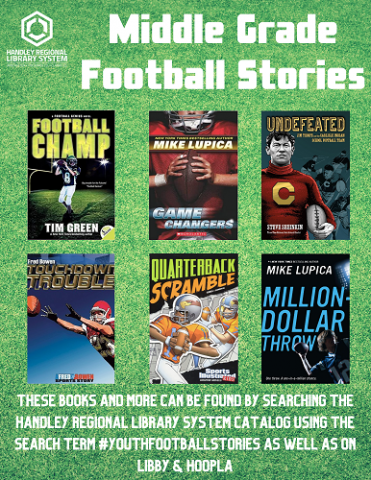 Our middle grade book spotlight this week is on Middle Grade Football stories since it is the start of the NFL season!!!  With a combination of fiction and nonfiction, these titles provide different aspects and perspectives of the game of football and what it takes to play the game.  Also, many of these books are part of a series so if you enjoy one of them, you will have more to choose from!  These books and more can be found by searching the catalog using the search tag #youthfootballstories as well as on Libby and Hoopla.  Check back next week for a new Middle Grade book spotlight and if you have any book suggestions, please let us know!!

Football Champ by Tim Green--Twelve-year-old Troy's uncanny gift for predicting football plays proves a powerful secret weapon for the Atlanta Falcons, but a seedy reporter with a vendetta suspects something is going on and sets out to shred the reputations of Troy and star linebacker Seth Halloway.

Touchdown Trouble by Fred Bowen--In an important game against the Giants, the Cowboys discover that Sam's final touchdown was made on a fifth down and their winning touchdown was scored illegally. The Giants should have won the game and the Cowboys need to decide if they tell someone or keep it quiet and remain undefeated.

Game Changers by Mike Lupica--When the coach's son, Shawn O'Brien, is chosen to play quarterback, eleven-year-old Ben McBain is not surprised--but when he tries to be a good teammate and help the inconsistent Shawn, he is startled to learn that his new friend does not really want the position.

Quarterback Scramble by Brandon Terrell--When star quarterback Wes Blake's grade began to take a dive, he was benched and replaced with backup quarterback Ben Paulson. With Ben taking charge, however, the team begins losing game after game, leaving the team wondering what they should do to get back on track.

Million Dollar Throw by Mike Lupica--Eighth-grade star quarterback Nate Brodie's family is feeling the stress of the troubled economy, and Nate is frantic because his best friend Abby is going blind, so when he gets a chance to win a million dollars if he can complete a pass during the halftime of a New England Patriots’ game, he is nearly overwhelmed by the pressure to succeed.

Undefeated: Jim Thorpe and the Carlisle Indian School Football Team by Steve Sheinkin--Features the underdog story of the Carlisle Indian Industrial School football team which under the leadership of coach Pop Warner and player Jim Thorpe became known as "the team that invented football." Highlights the systematic governmental persecution by the government and the players determination and grit, on and off the field, that led them to defeat more privileged schools like Army and Harvard.