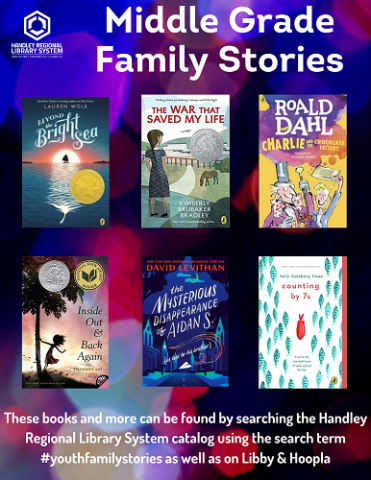 Our middle grade book spotlight this week is on books that are all about families!!  Let’s face it, love ‘em or hate ‘em, where would we be without our families (those by blood and the ones that we choose)?  One of the amazing things about books is that there are so many different kinds and types within the collection and when it comes to books that feature families and family life, it is no exception plus sometimes it is very interesting reading about someone else’s family and then comparing yours (and realizing how lucky you may just be!).   These books and more can be found by searching the catalog using the search tag #youthfamilystories as well as on Libby and Hoopla.  Check back next week for a new middle grade book spotlight and if you have any book suggestions, please let us know!!

Beyond the Bright Sea by Lauren Wolk---Twelve-year-old Crow has no memory of her mother. Her life with Osh, the man who found Crow as an infant washed ashore in a small boat near his island home, is all she's ever known. But when Crow spots a fire across the sea on the nearby Penikese Island, it ignites a flame inside of her that propels Crow on a journey to discover her roots.

Inside Out and Back Again by Thanhha Lai--When her homeland, Saigon, falls during the Vietnam War, young Ha flees from the country with her mother and three older brothers. Through a series of free-verse poems, Ha chronicles her life-changing journey in 1975 from Guam to America, resettling in Alabama. Ha struggles to assimilate to American culture; the different food and language, the odd landscape, the mean kids, and she still misses her father, who's been missing in action for 9 years.

The War that Saved My Life by Kimberly Brubaker Bradley--Mam, ashamed of her daughter Ada's club foot, has kept Ada a prisoner in their apartment for nine years. Ada's brother, Jamie, brings Ada stories of the outside world that make her long for escape all the more. World War II arrives and the Germans begin bombing London, prompting the evacuation of all of London's children. Ada's cruel mother intends to keep her from going, but Ada escapes with the help of Jamie and ends up in the care of Miss Susan. Although Miss Susan claims she is not a nice person, her growing affection for the children is evident. However, the love between Miss Susan and the siblings may not be strong enough to carry them through the war's end, when Ada may have to return to her abusive mother.

The Mysterious Disappearance of Aidan S. (as told to his brother) by David Levithan--Lucas's brother Aidan disappears for three days. Everyone looks for him, the police question every neighbor, and strangers organize searches that get on national news. Then, just as suddenly as he disappeared, Aidan returns, and no one seems to want to know the truth about where he has been. When Lucas asks Aidan, the story he tells is patently impossible--and yet there is nothing else that fits, and Lucas has to decide if he can believe in the impossible.

Charlie and the Chocolate Factory by Roald Dahl--Each of five children lucky enough to discover an entry ticket into Mr. Willy Wonka's mysterious chocolate factory takes advantage of the situation in his own way.

Counting by 7s by Holly Goldberg Sloan--Twelve-year-old Willow Chance knows she's different from other kids her age, and not just because she's the adopted, mixed-race child of white parents. In addition to being abnormally intelligent, Willow also possesses some distinct personal interests that set her apart--such as her fascination with disease and the number seven. When her parents die suddenly in a car accident, Willow's uncertain fate becomes intertwined with those around her, such as her friend, Mai, and Dell Duke, her school's unmotivated guidance counselor. Chapters alternating from first to third person shed light on both Willow's thought process and her relationships with others, and illustrate Willow's journey to find her place in the world.