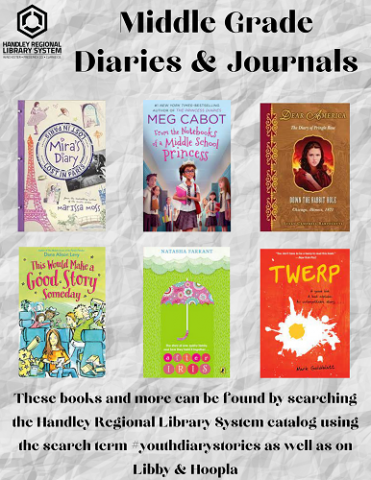 Our Middle Grade book spotlight this week is all about books that are written in a diary/journal format.  While many of us are very familiar with Diary of a Wimpy Kid, it was not the first to have a book written as a journal nor is it the only one out there.  We are taking a look at some amazing historical, realistic, and humorous titles that are delivered as though they were written in a diary or journal by the main character which can be a fun way to read a book.  These books and more can be found by searching the catalog using the search tag #youthdiarystories as well as on Libby and Hoopla.  Check back next week for a new Middle Grade book spotlight and if you have any book suggestions, please let us know!!

Mira’s Diary: Lost In Paris by Marissa Moss--Mira receives a postcard from her mother, who has long been missing, and then she and her father and brother go to Paris to look for her. What they couldn't know is that they are looking in the wrong century. Mira's mother is trapped in the past, and when Mira touches a gargoyle on top of Notre Dame she is sent back into her mother's time, where she learns she has to save her mother's life.

This Would Make a Good Story Someday by Dana Alison Levy--When Sara's mother, Mimi, wins a fellowship to write a book that requires her to spend a month traveling across the country taking notes, Sara is less than thrilled to be stuck going along for the ride. She had big plans for the summer before seventh grade, and they didn't include being stuck on a train with her two sisters, both her mothers, and her older sister's college boyfriend, Root. Sara doesn't expect to have any fun at all this summer, but sometimes life surprises you in delightful ways.

From the Notebooks of a Middle School Princess by Meg Cabot--Twelve-year-old Olivia, a biracial aspiring wildlife artist, learns that her long lost father is the prince of Genovia and is whisked off on a trip to meet him in New York City. While there, she undergoes training to realize her full princess potential.

After Iris by Natasha Farrant--Things have steadily fallen apart since the death of Blue Gadsby's twin sister, Iris, three years ago. Her parents are emotionally distant and often absent; older sister Flora is more concerned with the color of her hair than anything else; and younger siblings Jasmine and Twig spend their time racing cars with their pet rats. To complicate matters, the family's Bosnian au pair, Zoran, has difficulty dealing with the family's brokenness. When tragedy strikes again, the family is forced to confront their wounds and decide whether they will reunite or disband. Readers will laugh and cry as they journey with Blue.

Down the Rabbit Hole by Susan Campbell Bartoletti--It is 1871 in Scranton, Pennsylvania, and fourteen-year-old Pringle Rose is still grieving from the deaths of her parents. With her brother Gideon, who has Down syndrome, she escapes from her uncle and aunt and takes a train to Chicago--but disaster seems to follow her there.

Twerp by Mark Goldblatt--Sixth-grader Julian Twerski doesn't believe he's a bully--he just made a mistake when he participated in bullying the school's designated twerp. After his suspension is up, Julian is given the option by his English teacher of writing a year-long journal, in the hopes that Julian will see that he actually is a bully and needs to change. Although Julian resists that admission throughout the year--instead writing about the fun he and his friends have, and the love triangle amongst him, new-girl Jillian, and his best friend, Lonnie--he eventually comes to terms with his actions and tries to make things right.