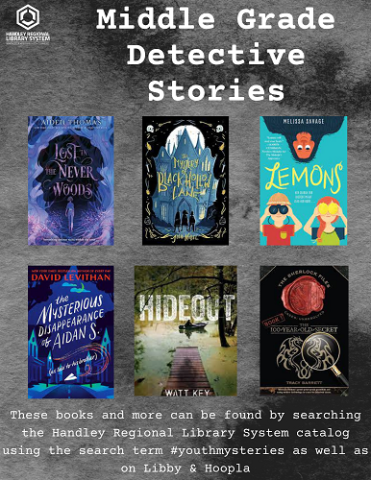 Our middle grade book spotlight this week is taking a look at Detective Stories!!!  Now, these stories do not have to be your traditional Sherlock Holmes type stories for them to be considered “detective”.  Instead, these stories are ones that our main characters are trying to solve and figure something out; for some it may be a murder or a dead body but for others it could be something from their past or even a trying to figure out if bigfoot really does exist.  You will be trying to solve right along with the leads and become a detective yourself!  These books and more can be found by searching the catalog using the search tag #youthmysteries as well as on Libby and Hoopla.  Check back next week for a new middle grade book spotlight and if you have any book suggestions, please let us know!!

Lost In the Never Woods by Aiden Thomas--Five years prior, eighteen-year-old Wendy disappeared with two of her brothers in the woods outside her Astoria, Oregon town. Returning six months later without her brothers and with no memory of what happened, Wendy has tried to move on in her life. However, soon after local children start disappearing again, she discovers a boy named Peter Pan lying on a road--a boy she thought only existed in stories. Peter asks her for help finding his shadow and the children it's been stealing. Hoping to find her brothers, Wendy agrees. Yet, the presence of Peter triggers dark memories in Wendy, and as they return, she learns Peter isn't exactly who he says he is.

The Mysterious Disappearance of Aidan S. by David Levithan--Lucas's brother Aidan disappears for three days. Everyone looks for him, the police question every neighbor, and strangers organize searches that get on national news. Then, just as suddenly as he disappeared, Aidan returns, and no one seems to want to know the truth about where he has been. When Lucas asks Aidan, the story he tells is patently impossible--and yet there is nothing else that fits, and Lucas has to decide if he can believe in the impossible.

The Mystery of Black Hollow Lane by Julia Nobel--Emmy's dad has disappeared, and her mom, too busy to take care of her, decides to send Emmy to a boarding school in England. Before Emmy leaves, she finds a box of strange medallions in her attic that may have belonged to her dad. At school, she finds the same strange markings from the medallions all over the school, etched in the walls and in the books. Following the symbols, she and her two new friends discover the school's secret society. Could the society know why her dad is missing?

Hideout by Watt Key--While out exploring the bayou around his home, twelve-year-old Sam finds a lone boy named Davey mysteriously repairing a rundown shack deep in the woods. As the two get to know each other, danger increases for both boys when long-hidden truths come to light.

Lemons by Melissa Savage--Lemonade Liberty Witt's mama told her to make lemonade out of the lemons life sends her way, but when she has to move to Willow Creek, California, to live with her grandfather after her mother dies, Lem struggles to find the good in any of it. Then she meets Tobin Sky, the eleven-year-old CEO of Bigfoot Detectives Inc., who invites her on an adventure to capture Bigfoot on film.

The Hundred Year Old Secret by Tracy Barrett--Xena and Xander Holmes, an American brother and sister living in London for a year, discover that Sherlock Holmes was their great-great-great grandfather when they are inducted into the Society for the Preservation of Famous Detectives and given his unsolved casebook, from which they attempt to solve the case of a famous missing painting.